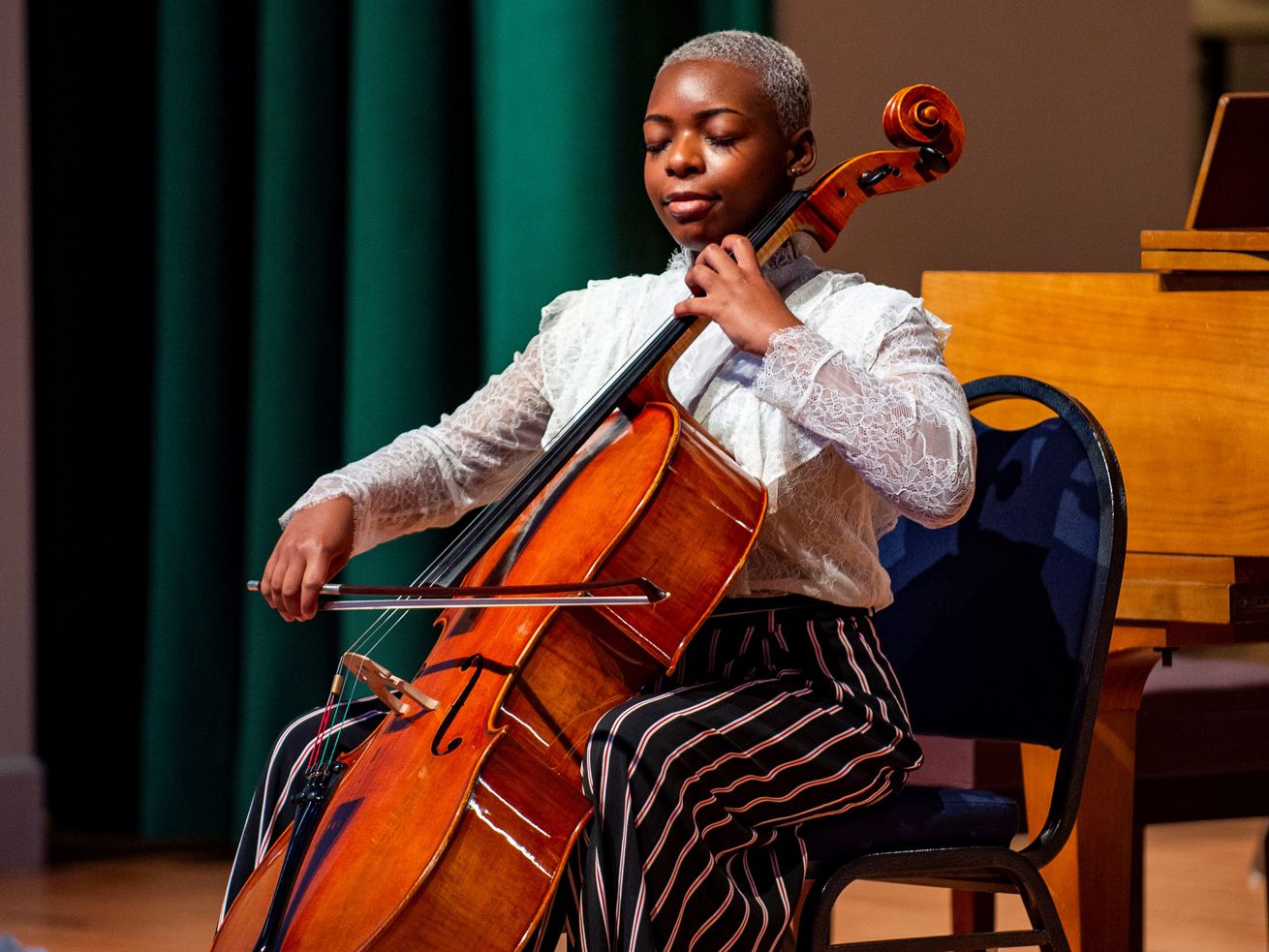 Ifetayo Ali-Landing is photographed on May 22, 2019, at the Kehrein Center for the Arts in Chicago. The sixteen-year old Chicago cellist will make her Chicago Symphony Orchestra debut on July 27 at the Ravinia Festival. | Patrick Gipson Photography

Sixteen-year-old cellist Ifetayo Ali-Landing has been playing string instruments since the age of 3.

Ravinia’s much-anticipated symphonic tribute to Leonard Bernstein on Saturday will be a impressive fete. “Man For All Music” will celebrate his greatest works from “West Side Story” to “Mass” and will be hosted by the late composer’s daughter Jamie Bernstein and feature the Chicago Symphony Orchestra conducted by the elder Bernstein’s sole female protégé Marin Alsop.

The storied night will also mark the CSO debut of 16-year-old cellist Ifetayo Ali-Landing, who will be one of seven soloists in the program.

The Hyde Park native has been playing string instruments since the age of 3, starting on violin and quickly moving to cello. She was the Junior Division First-Place Laureate in 2017 in the noted Sphinx Competition (put on by the Sphinx Organization, which is devoted to supporting people of color in classical music). Ali-Landing has also performed with the Wilmington, North Carolina Symphony, the New World Symphony in Miami Beach, Florida, the Pittsburgh Symphony and Buffalo Philharmonic, among many other notable orchestras. Other than an appearance with the Chicago Sinfonietta, the up-and-coming star’s debut at Ravinia will be among the rare few opportunities she’s had to perform in her home city.

“It’s nerve-wracking,” Ali-Landing says, laughing. “My friends and family all will be watching the performance. But I’m really excited. I want to show them what they have been helping with over the past 13 years, and make them proud.”

Ali-Landing hails from a long lineage of exceptional musicians. Her grandfather, James Holland, a Chicago Police Officer and part-time teacher, played in regional orchestras and passed on the gift to his daughters, including Lucinda Ali-Landing, Ifetayo’s mother.

“We lived on the South Side and my dad drove us to Evanston two to three times a week to learn at what is now the Music Institute of Chicago,” Lucinda says, adding, “It made no sense to me why there wasn’t something closer where we could study.”

In 1998 Lucinda Ali-Landing changed that, establishing the Hyde Park Suzuki Institute, a nonprofit that offers lessons to children ages 3 and up in violin, viola, cello and piano based on the renowned Suzuki method, which uses a linguistic approach to teaching music.

“I thought it was important to start a school on the South Side of Chicago that provided high-level instruction that was economically viable for people,” says Lucinda, noting that the school can draw upwards of 250 students in its most popular terms. Ifetayo and her sisters, 19-year-old Adjedmaa and 10-year-old Kai Isoke have all attended and racked up considerable achievements; for Ifetayo, her greatest so far may be the 12 million views on Facebook for a video in which she recorded the 1st movement of the Saint-Saëns Cello Concerto when she was just 10 years old.

The now teenager, whose additional instructors have included Northwestern University professor Hans Jørgen Jensen and “Hamilton” touring cellist Tahirah Whittington, says she practices anywhere from three to six hours a day and stays motivated by “seeing myself get better as well as the looks on people’s faces when I perform … especially children.” She adds, “My favorite concerts are children’s concerts; they have wonderful questions and I hope they are inspired and feel like they can do anything in life.”

Ali-Landing has been praised as a role model not only for young kids but also for women and people of color who don’t always see representation in the classical music realm.

“When I started it was not my main goal to be a role model; I played because I loved it,” she said. “But I really have been trying to make sure other people who look like me know they are welcomed here in the classical community and feel they should be here. I think the community could be more diverse but we are getting there. Especially with organizations like Sphinx.”

When she’s not practicing classical music or contributing orchestral works to recorded albums (including an appearance on pianist Laura Downes’ 2019 album “Holes In The Sky”), Ali-Landing is also a rabid fan of R&B and hip-hop including Beyoncé, Rico Nasty, Childish Gambino and Lil Uzi Vert.

“I’m finding ways to mix classical and modern,” she says, noting that her future vision is to work in the tech industry and find ways to bring music further into the fold.

“I love watching videos of people putting computers together. PC builds is something I could watch that all day,” she says, adding, “I have thought of trying to combine music and tech into an act. I haven’t thought of how yet, but it’s been on my mind.”

There’s no doubt this prodigy will be making headlines very soon for that, too.