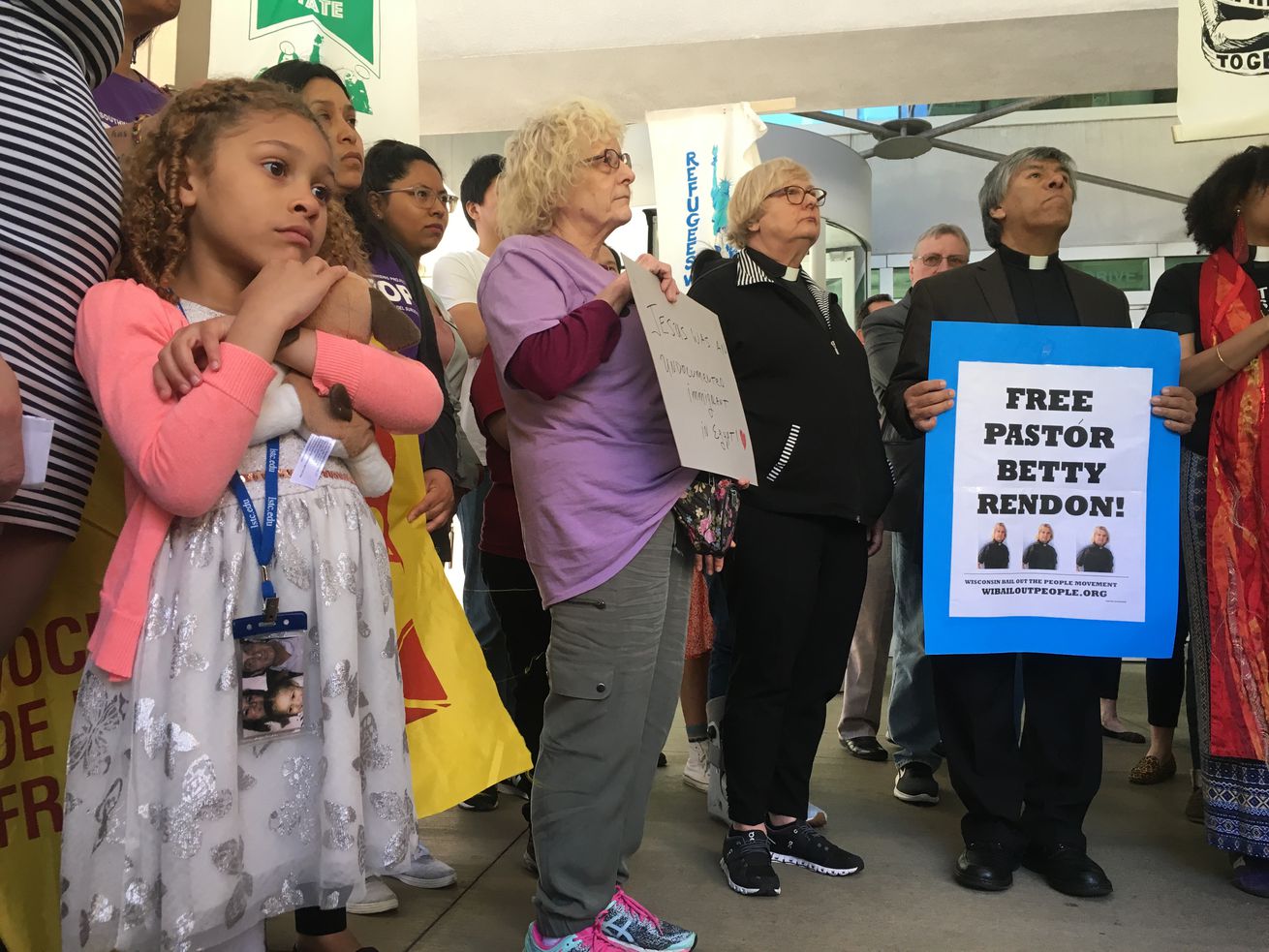 Paula Hincapie-Rendon and her 5-year-old daughter, Layla, spoke out Thursday against the detainment of pastor Betty Rendon and Carlos Hincapie.

Lawyers, with support from activists, petitioned U.S. Immigration and Customs Enforcement on Thursday to release the parents of Paula Hincapie-Rendon from their custody before they are deported to Colombia next week.

Hincapie-Rendon is a beneficiary of the Deferred Action for Childhood Arrivals program, which protects certain undocumented immigrants from deportation.

The agency released Hincapie-Rendon later that afternoon because of her active DACA status. Her parents — both of whom entered the country with tourist visas in 2004 and were denied asylum in 2009 — remain in ICE custody. Hincapie’s cousin, who was also detained on May 8 at the family’s house, has already been deported to Colombia.

Diana Rashid, an attorney with the National Immigrant Justice Center in Chicago, filed applications for stay of removal for both Rendon and Hincapie at ICE’s field office in the Loop on Thursday.

The couple could be deported as soon as May 29, Rashid said.

“Their case is fairly simple,” she said. “ICE can chose to grant their stay of removal request and release them under an order of supervision so they can continue to live with their family and their community, or they could chose to deport them.”

An ICE public affairs officer said Thursday the agency had no comment.

The Hincapie-Rendon family fled Colombia in 2004 after guerrilla rebels threatened to kill Rendon, a school principal at the time. Since then, the couple bought their family house in Englewood and maintained spotless criminal records.

Rendon was set to begin her doctorate at the Lutheran School of Theology at Chicago in June. For the past few years, Rendon drove 2 1/2 hours from Englewood to Emaus Evangelical Lutheran Church in Racine, Wisconsin, every Sunday to preside over the church’s Spanish Mass.

Rendon is also a breast cancer survivor who before being detained was being treated for possible cancerous tumors in her colon and urinary tract, Rashid said.

Dozens rallied outside ICE’s field office on Thursday calling for the agency to release Rendon and Hincapie.

Bishop Paul Erickson of the Evangelical Lutheran Church of America’s Greater Milwaukee Synod criticized the sharp rise in arrests and deportations of undocumented immigrants without criminal records under the Trump administration at the rally.

“The people who are elected to oversee our society are charged with the responsibility to enhance life and support families who make up the heart and soul of our communities — not tear families apart and drive them further into the shadows,” he said.

Ruth Lopez, an National Immigrant Justice Center attorney representing Paula Hincapie-Rendon, said her client is “overwhelmed” and “feels responsible” for the detainment of her parents.

“I feel like I’m living a nightmare,” Hincapie-Rendon said Thursday. “Every time my daughter sees a police car she asks if we’re going to be taken away like her grandparents.”

Five-year-old Layla held onto a photo of her grandfather throughout the rally. She had few words to offer the crowd.

“I love my grandparents, they’re my family,” she said.

Carlos Ballesteros is a corps member in Report for America, a not-for-profit journalism program that aims to bolster Sun-Times’ coverage of Chicago’s South and West sides.