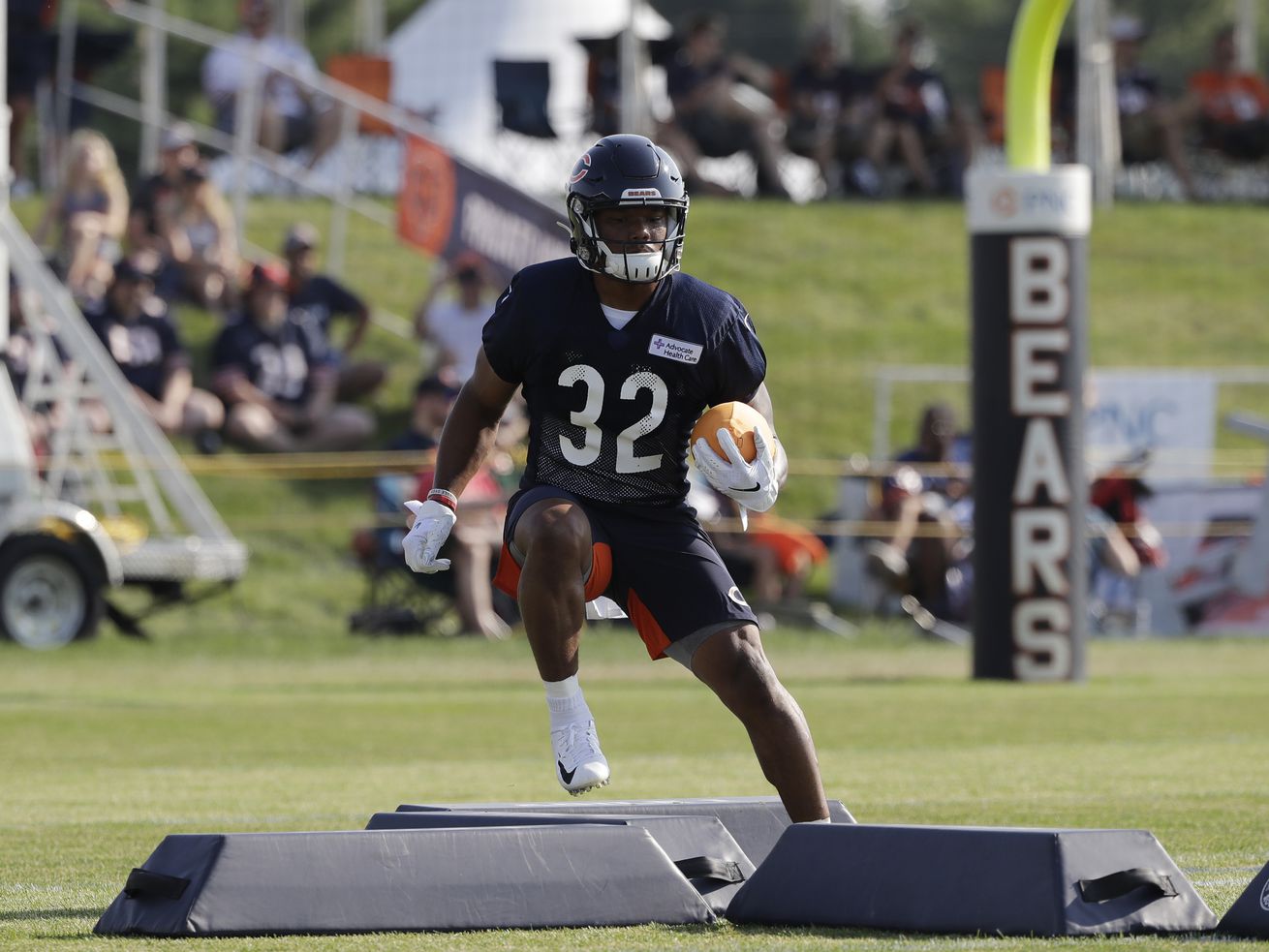 Bears rookie running back David Montgomery (32) is looking forward to the team’s first practice with pads on. “Now I get to play ball,” the third-round pick from Iowa State said. | AP Photos

Rookie eager to prove himself to his teammates: ‘I don’t think they really know what I can do.”

“He’s at a point right now where he won’t even talk to me, he’s so mad that we can’t put the pads on,” Bears coach Matt Nagy said.

“Naw, I’m just a really quiet person. I don’t really talk much,” Montgomery said with a smile. “My momma always told me, ‘You’ve got two ears and one mouth for a reason.’ So I [follow that advice].”

Still, Montgomery can’t deny he’s particularly eager to move into the padded-practice phase of training camp Sunday at Olivet Nazarene University. In a 90-man camp where everybody has — or should have — fresh legs, the rookie from Iowa State has been noticeably active, juking and shifting every chance he gets when he has the ball in his hands.

There is little live tackling in training camp practices, but with pads on there is plenty of hitting and an opportunity for Montgomery to show what he can do.

“The physicality part, how physical I run,” Montgomery said. “How shifty I actually am. We all have pads on. You can just be shifty a little bit, but they still got to tackle you. So now I get play ball.”

“Going into the start of this camp, that running back position is what I’m probably most excited to see,” Nagy said, “just because you can’t see much in OTAs on what they did. You can see mentally. You can see [what] they’re doing in their route tree. But now we put the pads on.”

But no player has been acquired specifically for this offense like Montgomery. The Bears traded a former Pro Bowl running back, Jordan Howard, to make room for Montgomery. And Bears general manager Ryan Pace traded up 14 spots in the third round to get him with the 73rd overall pick.

“[After] he left Ryan’s office, we all looked at each other and we’re like, ‘We love that dude.’” Bears director of college scouting Mark Sadowski said at a Bears100 convention panel in June. “Because he was better than we thought.”

But now, with the pads on, it will get that much more real.

“You’re going to see that he breaks tackles,” Nagy said. “I mean, he was tops in college football in [broken tackles] and now you’re going against the big boys. And there’s some guys that can thump you. And he understands that. He lives for that. That’s what he wants to do. He’s a running back that plays with a physical style, but yet has the ability to do a lot of different things in the passing game.”

Running back Tarik Cohen likes what he’s seen so far from Montgomery.

“I know what type of player he can be,” Cohen said. “You never really know what’s going to happen. But the signs he’s shown are definitely very promising. He’s a strong runner and he can also cut. His legs are very strong. He led the NCAA in broken tackles … so I’m ready to see him ball.”

And once Montgomery gets the pads on and into a competitive groove, he figures to start speaking up more.

“He’s been talking,” Nagy said. “He’s quiet, but he has a sneaky confidence to him that I like.”

“He’s just quiet to you all,” Cohen said. “That boy is a jokester. He’s just in his shell right now. He’s going to break out soon.”