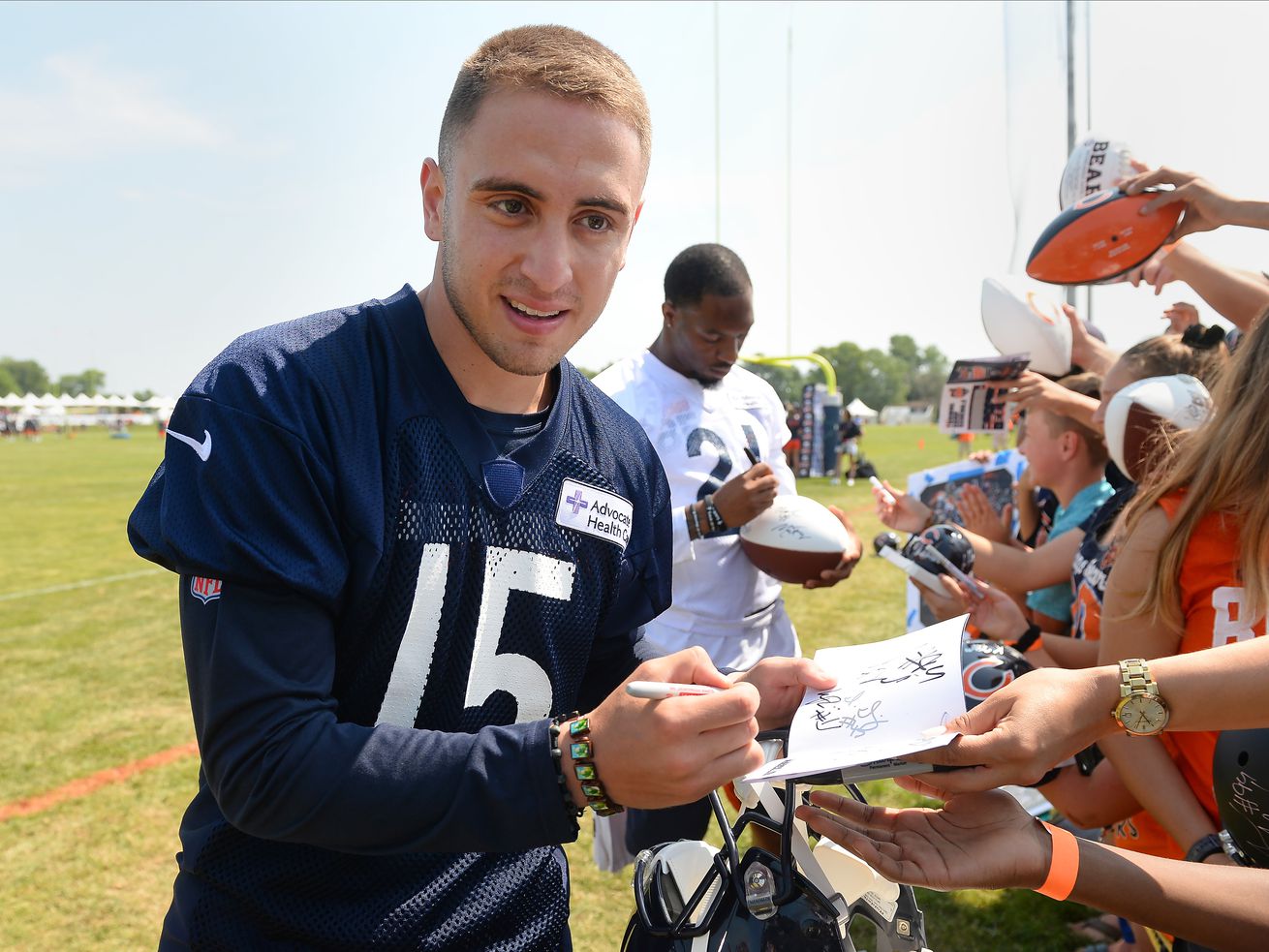 Eddy Piñeiro made the 63-yard kick, with distance to spare. The crowd of 8,813 fans chanted his name.

BOURBONNAIS — Bears kicker Elliott Fry had made six-of-seven field goals Saturday when he insisted he try a 60-yarder. He split the uprights.

Eddy Piñeiro had drilled six-of-seven Sunday when it was turn for what Matt Nagy called “dealer’s choice.” Coaches asked Piñeiro if he wanted to try a 60-yarder, the way Fry had.

“Mentally I was just staying calm. I know I had to do my job. My job is on the line every day.”

Piñeiro made the 63-yard kick, with distance to spare.

The crowd of 8,813 chanted his name at Olivet Nazarene University.

“I’ve never seen so many people cheer so loud in a practice before,” Piñeiro said. “I’ve heard it in a game. But in a practice, it’s unreal.”

The Bears’ training-camp kicking competition couldn’t be off to a better start.

“How do you not love two kickers battling for one spot competing their tails off after everything that’s gone on with our team and our city?” head coach Matt Nagy said. “I appreciate that.”

Piñeiro’s performance was even more impressive than that of Fry one day earlier. Piñeiro, after all, had 24 hours to think about how good his fellow rookie had been. That’s the pressure provided by the Bears’ unusual training camp setup, in which the two men alternate days in which they kick.

“You think about it, you feel it,” Piñeiro said. “You know you have to come out and do better than the next guy.. …

“You just mentally prepare that you’re the guy that day. All the eyes are on you.”

Fry — who, like Piñeiro, said he likes the alternating days — wasn’t surprised by the counter-punch.

Bears fans, though, can’t be faulted for thinking otherwise. Cody Parkey missed eight field goals last year, including the playoff double-doink. Since the Bears cut Robbie Gould on the eve of the 2016 season, they’ve made 76 percent of their field goals, the second-worst mark in the NFL.

“This has been a kicking situation for the past couple years,” Piñeiro said. “Everyone acts like it was just last year. … We’re just trying to find the right guy.”

If Piñeiro turns out to be that guy, it would cap a most unusual path to the NFL. He’s confident, bordering on cocky — Piñeiro was quick to say fans chanted his name at Florida practices, too — and has the leg strength to back it up.

He proudly spoke Sunday of starting his life with little — his parents were both illegal immigrants, he said. His father came to Cuba on a boat, his mom from Nicaragua on an airplane. They met at a Miami church.

“Just seeing them, seeing my parents have nothing and me growing up with nothing,” he said. “It’s motivating to be where I am today.”

His father — who went from working at a restaurant to building kitchens — is a former pro soccer player. He encouraged his son to try football his senior year in high school. He kicked a few extra points, but no field goals, over seven games.

After going to junior college, he wowed at a few private kicking camps and became the NCAA’s most coveted kicking recruit. He set a Florida Gators record by making 88.4 percent of his kicks over two years.

Piñeiro seemed to have the Raiders job won last year before hurting his groin in the preseason. The Bears traded a conditional 2021 seventh-round pick for him in May.

Sunday, at least, he was money.