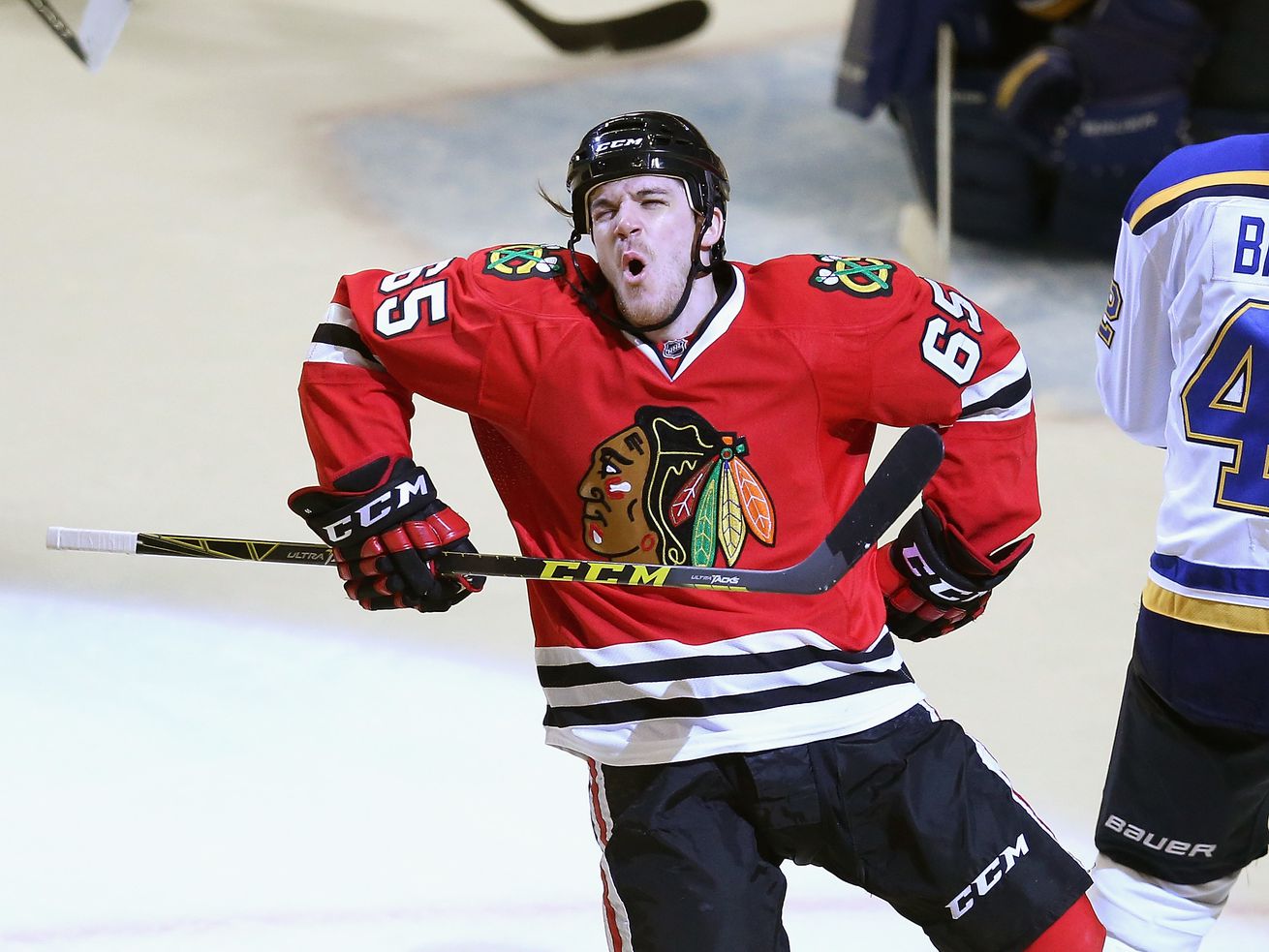 The Blackhawks acquired Shaw from the Canadiens after trading him before the 2016-17 season for two second-round picks.  | Jonathan Daniel/Getty Images

The Blackhawks recently re-acquired Shaw from the Canadiens after trading him before the 2016-17 season for two second-round picks.

None of Andrew Shaw’s old teammates could hide their excitement in having him back.

Sure, Shaw is coming off one of the best seasons of his career. He recorded a career-high 47 points last season and was one goal away from matching his career season-high of 20 — a mark he set with the Blackhawks during the 2013-14 season.

But what many of his teammates missed and are happy to have back is the infectious energy he brings on and off the ice.

“The season gets dragged out, you’re in some dark cities, [with] snow and weather and all that kind of stuff,” defenseman Brent Seabrook said Friday during the team’s annual convention. “And then a guy like Shawzy really brings that energy, that fire. He’s probably over my shoulder right now, poking me.”

Shaw returns to the Hawks as a more mature and experienced version of the on-ice irritant that helped the Hawks capture Stanley Cup titles in 2013 and 2015.

But make no mistake about it: Even though he’s older and wiser, he hasn’t changed. He said he’s still the same guy and will bring the same noise in the locker room that he used to.

“I’m still going to have a lot of fun,” Shaw said. “I’ll still annoy guys from time to time, but it’s all fun and games. I have grown up — I’m older, I’m married, I have a lovely daughter and she’s made me change even more. But I’m still the same guy.”

Jonathan Toews said the Hawks understood what they were losing when the team traded him to the Canadiens before the 2016-17 season for two second-round picks.

Toews said Shaw is the kind of person who would run through a brick wall for his teammates, and provides leadership for the locker room.

“He’s one of those guys you love to have on your team,” Toews said.

During the convention, Patrick Kane recalled a conversation he and Shaw had over dinner in Chicago before Shaw was traded to the Hawks.

“I remember him saying to me, if he got traded to one place, he’d want to come back to Chicago,” Kane said. “We’re fortunate it worked out and happy to have him back, because he is such a great kid and brings a lot on the ice, as well. His game’s getting better and better, too, and probably better than we’d last seen him here in Chicago. He’ll definitely be able to help us out.”

Shaw said he kept up with the Hawks and always had an eye out for how they were doing, even while with the Canadiens.

He said it was tough to see them go from perennial contenders to missing the playoffs in consecutive seasons.

Shaw said the team must recapture the success they had when he was last on the team and he thinks their offseason moves will help.