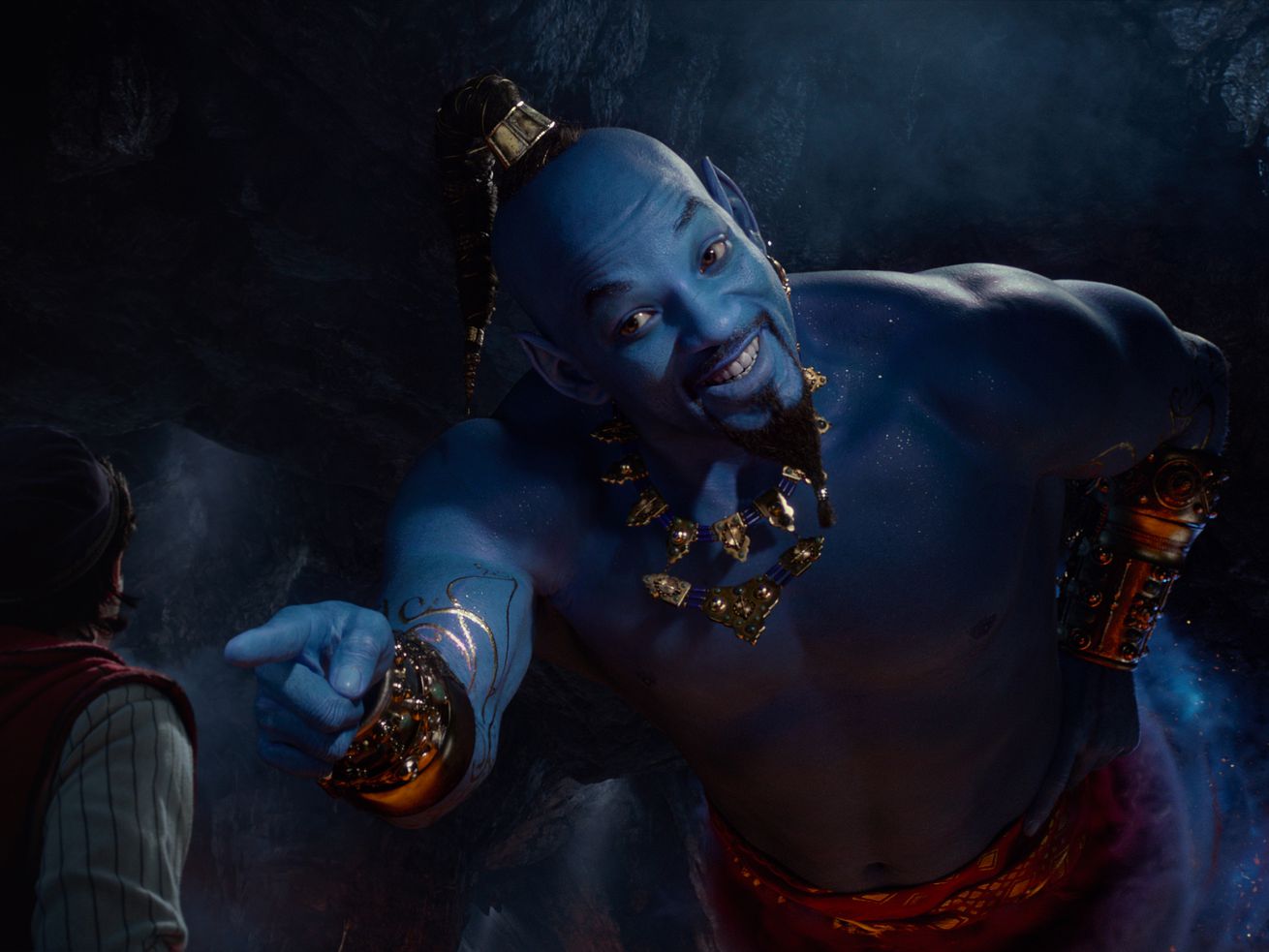 In Guy Ritchie’s shining, shimmering live-action update, the new princess and ‘street rat’ make a winning pair, and even the magic carpet has its moments.

Well how about that.

Despite a couple of large, genie-blue stumbles along the way, Guy Ritchie’s live-action version of Disney’s “Aladdin” is on balance a colorful and lively adventure suitable for all ages and a touching romance featuring two attractive leads — and has enough creative musical energy to introduce this story to A. Whole. New. World.

I’ll admit, I had my misgivings about this latest chapter in the ever-growing catalog of Disney animated classics getting the live action treatment, starting with that WTH (What the Heck!) first-look, still photo of Will Smith as the Genie, looking like some over-muscled Blue Man Group alumnus now working as a specialty dancer for bachelorette parties.

And even though I was cringing at Smith’s initial, not-all-that funny appearance as the Genie, his performance grew on me as the story progressed and the Genie became friends with a “master” for the first time in all the thousands of years he’s been summoned from inside that lamp.

When the Genie sees his buddy Aladdin making some bad decisions and says, “You’re breaking my heart,” dang but the big blue guy didn’t get to me.

Besides, even though the Genie is a plum part, ripe for scene-stealing (as the great Robin Williams demonstrated in the 1992 animated film), “Aladdin” is primarily about the romance between the title character, a lowly street thief, and the noble and lovely Princess Jasmine. And the strikingly handsome Mena Massoud as Aladdin and the strikingly beautiful Naomi Scott as Jasmine are a winning team.

Director Guy Ritchie, who made his bones some 20 years ago with badass films such as “Lock, Stock and Two Smoking Barrels” and “Snatch,” does a solid job of blending big set pieces, practical effects and the CGI wizardry that allows an enormous genie to emerge from a brass lamp, a monkey to be turned into an elephant, and a magic carpet to take Aladdin and Jasmine across the continent as they sing “A Whole New World” and don’t seem to be the least bit worried about the rug getting tired or caught in a rainstorm. (Can a soggy carpet fly?)

Mena Massoud’s Aladdin is a thief and “street rat” who works the bazaars of Agrabah, purloining goods and exchanging them for food (which he’ll give away to those even poorer than he, because he’s just that kind of guy).

When Aladdin meets Naomi Scott’s Princess Jasmine, she pretends to be her own handmaiden, but once Aladdin pays a visit to the castle (he’s REALLY good at using parkour-type moves to slip by the guards and such), he eventually susses out the truth.

They’ve got something, these two, but the laws of the land say Jasmine must marry a prince. If only there was some way for Aladdin to become a prince, hmmmm …

You know the deal. Aladdin rubs that magic lamp, and out pops the Genie, ready to grant three wishes.

Will Smith’s first appearance as the Genie is a mess, with Ritchie leaning far too much on special effects pyrotechnics, resulting in a manic scene featuring multiple Genies, as if we’re watching “Being the Genie,” which would be a really bad reboot of “Being John Malkovich.”

Eventually, though, we come to like this Genie, who takes a big brotherly interest in Aladdin and wants to see this kid make the right choices through the right wishes.

Marwan Kenzari snarls it up as the villainous Jafar, while Nasim Pedrad is endearing and funny as Jasmine’s handmaiden and best friend Dalia, who falls for the Genie without knowing he’s a genie. Billy Magnussen plays a new character, the bumbling Prince Anders from the kingdom of Skanland, who just sort of disappears from the movie, maybe because he wasn’t necessary in the first place.

The aforementioned “Prince Ali” number is filled with wondrous visuals that almost make us forget Smith sounds like he could crack glass (in a bad way) when he hits that “A-LEEEEE” note. Massoud and Scott aren’t the greatest vocal stylists in the world, but they do a fine job on “A Whole New World.”

Scott also gets the chance to shine and absolutely sparkles with “Speechless,” a new song written by the EGOT (Emmy-Grammy-Oscar-Tony) due of Pasek & Paul with Disney legend (and eight-time Oscar winner) Alan Menken. It’s a signature moment for Scott and for Jasmine — a rousing declaration of female-power independence by a princess who will no longer be “seen but not heard,” as Jafar hisses at her.

Jasmine for Sultan of Agrabah. She’s the right leader at the right time.