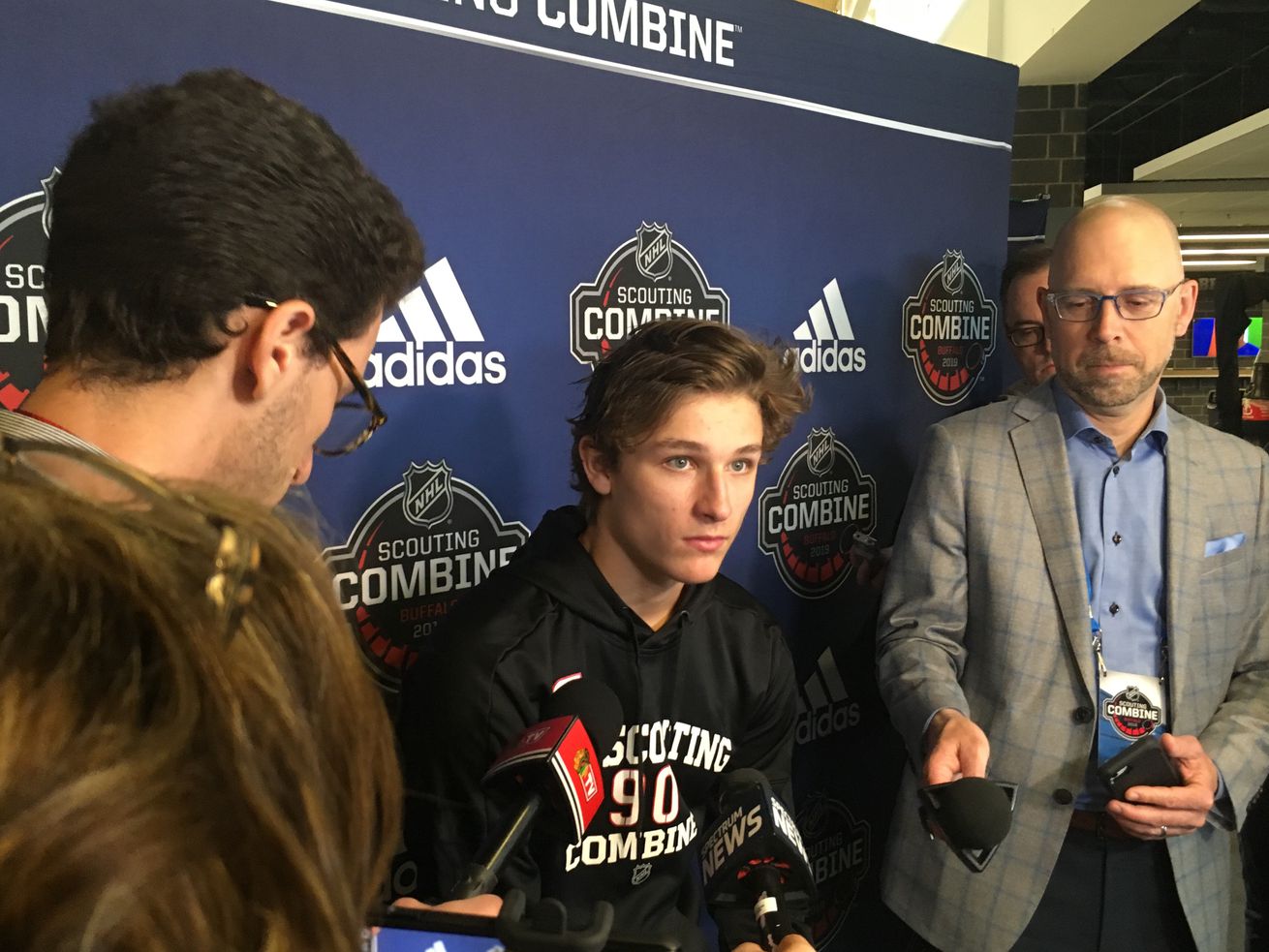 From Bowen Byram to Trevor Zegras, the Hawks have a variety of enticing options.

BUFFALO, N.Y. — After a week of physical tests and team interviews, the NHL Combine wrapped up Saturday afternoon, leaving the Blackhawks with less than three weeks now before they must announce the third overall selection on stage in Vancouver.

Director of scouting Mark Kelley said Friday that the organization has narrowed the list of candidates to roughly six prospects, and though he didn’t name them specifically, at least four or five are definite inclusions.

Turcotte has the tools: He’s an all-around center with excellent vision and hockey sense, deceptive speed, innate drive and a knack for getting to dangerous areas of the ice.

Turcotte fills a need: The Hawks don’t currently have a forward prospect anywhere near Turcotte’s caliber — they really haven’t in years — and he’s a much different player than the last one they did have (Alex DeBrincat).

And Turcotte wants to be a Blackhawk: He’s from the northwest suburbs of Chicago, is signed with Wisconsin for college, and raved at the combine about his admiration for Jonathan Toews.

If the Blackhawks want a Toews successor for down the road, and a one-year-away NHL impact player for the short term, Turcotte is the answer.

Although the Blackhawks are far more flush with prospect defensemen than forwards, they certainly need all they can get, considering the massive defensive struggles at the NHL level lately.

If Byram can hop into the United Center immediately, that would boost his stock even more. He’s an elite puck-moving defenseman, particularly great at creating offense on the breakout, who is several tiers above any other rearguard in this draft class.

Zegras was the setup man this past season on a loaded U.S. national team that also featured Turcotte, Cole Caufield (see below) and Jack Hughes.

Kelley called Zegras “as skilled as anyone in the draft,” which he demonstrates through his excellent — occasionally mind-blowing — passing ability. The playmaking skill has always been elite, but Zegras mentioned he’s improved his skating and agility, as well.

Some criticize the New Yorker for being dangerously flashy with his passes sometimes, but he made a wise comment Saturday about the need to learn and adapt to what works at each level of hockey as his career advances.

He’s been constantly compared to Alex DeBrincat for his fantastic wrist shot and petite 5-foot-7 frame, but he tried to pitch himself as more than simply a DeBrincat clone in his meeting with the Hawks this week, mentioning his speed and hockey sense as other strong attributes.

In a year laden with small- to medium-sized forwards, Cozen’s 6-foot-3 frame actually stands out, but he doesn’t play like a big-bodied grinder of old.

The Canadian center tore up his junior league this season, to the tune of 84 points in 68 games, and proves difficult to stop once he gets going.

Byram, a fellow WHL star, said Cozens “uses his body well to get to the net, and then when he’s there, he has the hands and the smarts to put the puck in the back of the net.”

The sixth and final player left on Kelley’s list is likely either the Podkolzin, a hotly debated Russian, or Kirby Dach, a safer yet lower-upside Canadian center.

The big downside to Podkolzin is that he has two years left on his KHL contract, and though he insisted Saturday that he intends to come to the NHL promptly when that expires, Russian players have a less-than-perfect track record in recent history of doing so.

On the other hand, he did attend this week’s combine in a display of commitment to an NHL future, and has professional league experience already — unlike almost all his peers — that he said has improved his reaction time, physical play and role versatility.