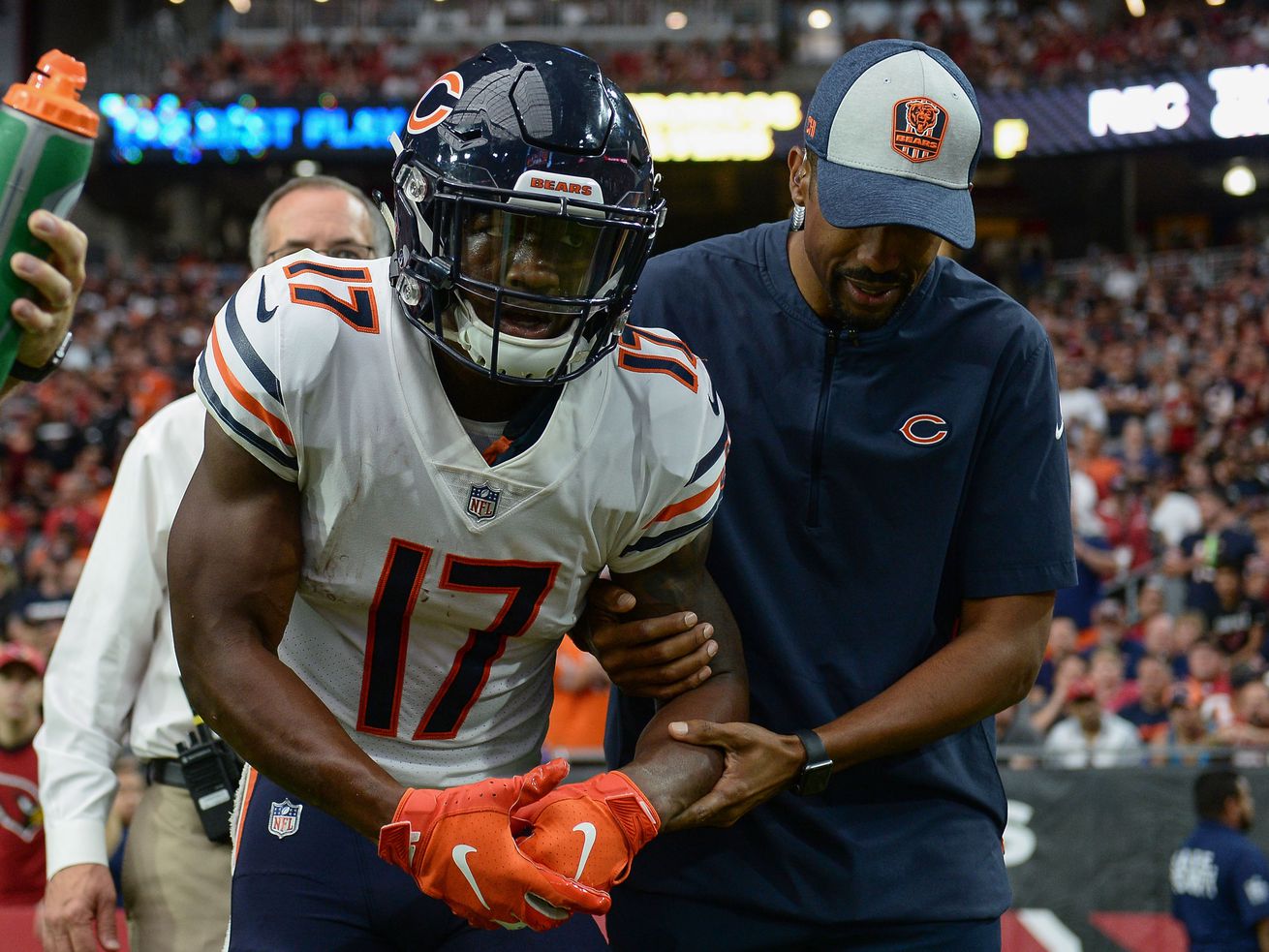 Bears wide receiver Anthony Miller (17) is helped off the field after suffering a dislocated shoulder against the Cardinals last year. Miller missed one game and — still bothered by the shoulder — ended the season with 33 receptions for 423 yards (12.8 avg.) and seven touchdowns in the regular season. | Photo by Jennifer Stewart/Getty Images

‘I wasn’t myself the entire season,” second-year WR said. “So you’ll get that this season.”

BOURBONNAIS — When Bears wide receiver Anthony Miller talked about the “Memphis grind” that nurtured him into an NFL prospect after being drafted in the second round last year, it sounded like a local twist on a good, old-fashioned work ethic.

As it turns out, Miller’s toughness was front-and-center in his rookie season with the Bears. The former Memphis star played through a shoulder injury that hampered him since suffering a dislocation in Week 3 against the Cardinals in Arizona.

The 5-11, 190-pound Miller missed only one game — the following week against the Buccaneers, when Mitch Trubisky threw six touchdowns passes — and contributed where he could. He finished with 33 receptions for 423 yards (12.8 avg.) and seven touchdowns.

After catching four passes for 25 yards and a touchdown in the final five regular-season games, Miller caught three passes for 34 yards against the Eagles in the wild-card game. But it was clear we weren’t seeing all of Anthony Miller.

“That was all heart,” Miller said Friday after Bears practice at Olivet Nazarene. “You can’t really put a percentage on that. But I was definitely busted up. I wasn’t myself the entire season. So you’ll get that this season.”

Miller had offseason surgery to repair the shoulder and reported to camp 100 percent healthy. Asked how his shoulder feels, he said resolutely, “It feels like youre shoulder.”

Now Miller is ready to go into the 2019 season at full speed. Playing through pain allowed him to get invaluable experience in the offense.

“It helped a lot,” Miller said. “Growing up, I’ve always been around tough people; tough environments. So I guess that has influenced me as well. Being in Memphis, we did play through a lot. You just got to stick through things sometimes.”

The Bears obviously have to keep Miller healthy this season, and coach Matt Nagy indicated the team will be careful with how they use him following the surgery.

“Everyone in here knows how tough he is,” Nagy said. “He’s as competitive as most people I’ve ever met. So it doesn’t surprise me that he wants to play.

“But we have to balance to make sure it’s safe. When you do things things the right way, and you handle those injuries the right way like we did, you use that to educate him going forward. And he’s done a great job rehabbing it and getting it right. You can see when he’s out here … he’s flying around Mentally for him, that was a big thing in the offseason.”

Miller’s confidence might even exceed his toughness. So at full strength, he’s ready to show what he can do in a Bears offense that is maturing with him.

“I’m very excited,” Miller said, “because now, not only am I more accustomed to the offense, the rest of the guys are as well. Mitch knows the playbook way better. We do as well. It’s just gonna be a way smoother season than last year, even though we did really good last year.”