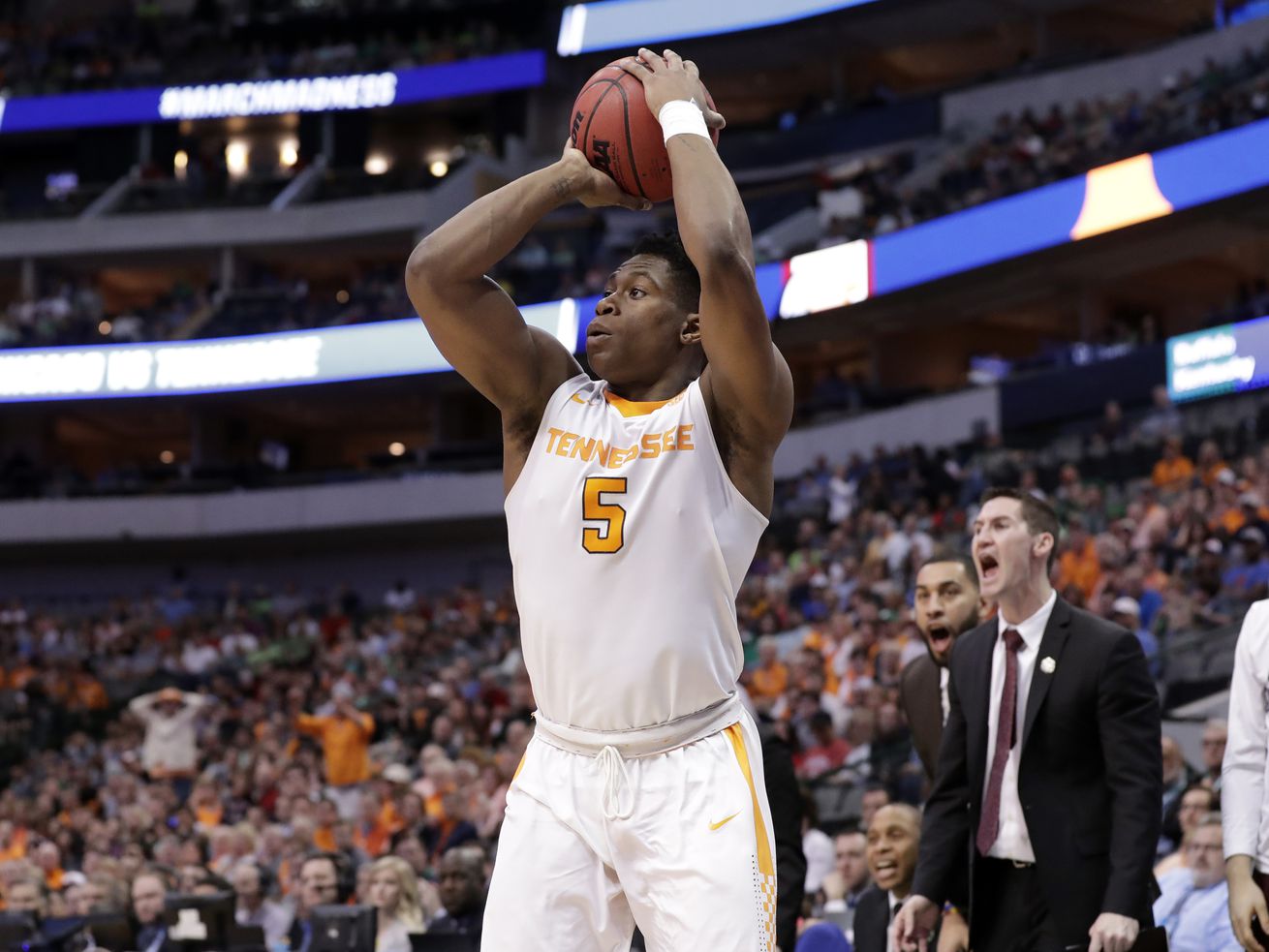 Former Zion-Benton, Tennessee standout believes he should be a first-round pick.

Zion-Benton graduate Admiral Schofield didn’t really have any of those moments or achieve that team success. The Zee-Bees kickstarted Lake County’s terrific run with a second place finish in Class 4A in 2008, but that was before Schofield was around.

Schofield averaged 25 points and 11 rebounds as a senior in 2015. He was a Sun-Times All-Area and All-State selection, but played third-fiddle to Brunson and Zion-Benton star Milik Yarbrough throughout his high school career.

None of that matters too much to Schofield now. The 22-year-old Tennessee graduate is poised to become an NBA draft pick in June, something that has eluded most of the big names from Lake County’s glory years.

“I’ve just been doing it my way and not trying to be like anybody else,” Schofield said at the NBA Draft Combine on the West Side last week. “And staying focused on what I need to do to show who Admiral Schofield is.”

He did that in Tennessee. Schofield averaged 16.5 points and 6.1 rebounds as he helped the Volunteers spend four weeks ranked No. 1 in the country. The 6-5 forward shot 41.8% from the three-point line, the key to his NBA opportunity.

“NBA teams know a lot about my shooting ability,” Schofield said. “I don’t think they know how well I can shoot it though. I can defend and do multiple things. Create a little bit for others and pass the ball well.”

The mock drafts have Schofield slotted anywhere from 23rd to 44th pick.

“I’m aiming for the first round,” Schofield said. “I deserve to be there and I’ll be working towards that. I’m confident I can contribute to any team or any organization that brings me in. Not just with my play but being a great teammate and being an ambassador for that team and that community.”

“I’m a position-less player and most teams see me that way, being able to guard two through five or four,” Schofield said. “Being able to switch and slow down the best scorers in the league and being able to knock down corner threes. Really just helping keeping the flow and impacting wins like I did at Tennessee.”

At 6-6, 240-pounds Schofield is a rock physically. He also seems like a stable bet for NBA general managers mentally. Schofield grew up in a military household and knows firsthand what it takes to succeed as a pro athlete. His older brother O’Brien won a Super Bowl with the Seahawks.

“He’s helped me a lot,” Schofield said. “I got a little taste of that type of spotlight with him being an NFL champion. Just seeing the process of that, seeing what it takes to win on that level. It wasn’t all glitz and glamor, it was hard days for him. Missing family, having to get more sleep and not spending as much time with his kids. And how he had to take care of his body. I learned from that to put myself in a better position.”

Schofield could become the third player from Lake County’s run to play in the NBA. Paul had a one-year stint with San Antonio. Brunson, a second round pick in last year’s draft, started 38 games and averaged 9.3 points for Dallas this season and appears to have established himself in the league.

“It’s pretty cool, seeing that made [the NBA] seem closer to me,” Schofield said. “Me and Jalen keep in contact. We’ve competed against one another since feeder league. It’s been great seeing how his career has gone.”

Schofield, who grew up a Bulls fan, has worked out for several teams. The Bulls have the the eighth pick in the second round, 38th overall, which is right about where the draft evaluators think Schofield could slot.

“It would be great to be able to play for the Bulls and be at home,” Schofield said. “Hopefully I can go earlier than where they pick. Or if they move up to get me that would be great.”

“I wanted to be just like Mike when I was young. I would run back and forth dunking on my Fisher Price rim. Just playing in the house and my family announcing “Number 23 Admiral Schofield.” Having those dreams of being in the NBA has always been there. Michael Jordan really put that in my mind and that has always been in my imagination and it is coming to fruition now.”