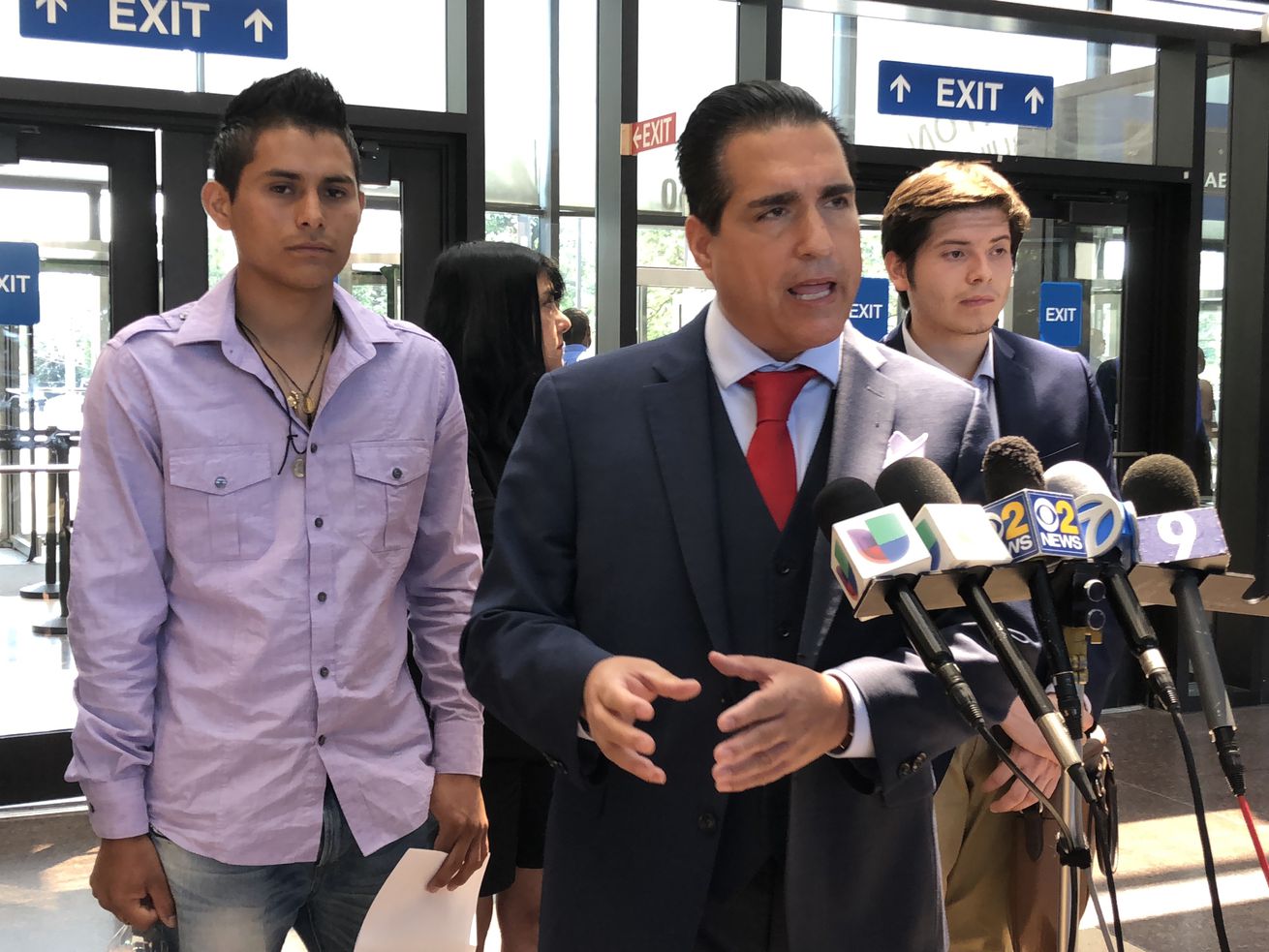 Yovani Lopez looks on as his lawyer, Frank Avila, addresses reporters at the Leighton Criminal Courthouse Thursday, July 25, 2019 | Andy Grimm for the Sun-Times

Yovani Lopez and his supporters claim they have a right to demand justice — publicly— for the slain teen mom and the couple’s child.

The husband of a murdered West Englewood teen and his supporters say they won’t be silenced, even if a Cook County judge tries to order them to keep quiet about the three people charged with murdering Marlen Ochoa-Lopez and her infant son.

Judge Peggy Chiampas on Thursday declined to rule on an request from lawyers for Clarisa and Desiree Figueroa for a decorum order that would bar parties tied to the case from talking about it.

Yovani Lopez, his lawyer and community activists expressed their outrage at the horrific Scottsdale murder to TV cameras at every court date of the Figueroas and their co-defendant Piotr Bobak.

Prosecutors have said the Figueroa’s strangled the pregnant 19-year-old Ochoa-Lopez in their living room after luring the teen to their house with an offer of a free stroller and baby items. They then allegedly cut the baby from her womb. Clarisa Figueroa, 46, called an ambulance when the baby remained unresponsive — telling doctors she had just given birth to the child. The infant, Yovani Yadiel Lopez, died at a hospital after two months on life support.

Chiampas Thursday set a Sept. 10 date for a hearing on the gag order, and referred lawyers to state Supreme Court rules and crime victims’ rights statutes, and rules of conduct for attorneys.

“I’ve got a copy if you need it. I will ask you to abide by it,” Chiampas said.

Community activist Julie Contreras said, “Hearing today a judge even consider to place a gag order on our free speech was so un-American, so un-constitutional.

“We have a right to speak out against the harm that was inflicted on this mother and this child… (the defendants) have been tried by a jury of their peers already and they don’t care where they look for a jury in the world.”

Frank Avila, lawyer for the Lopez family, said he supported the Figueroas’ right to a fair trial and a presumption of innocence, but said that judge should acknowledge the free speech rights of the victims’ family. He pointed out that defendants in high-profile cases, including O.J. Simpson, have been acquitted even after months of publicity. Motions by lawyers for the Figueroas calling for a gag order are an admission that “they have no defense,” Avila said.

“They want to silence us, but if they silenced us, the stones themselves would speak on behalf of the murdered Marlen Ochoa and the murdered Yovani Yadiel Lopez,” Avila said.

Lopez, speaking in Spanish with Contreras acting as his interpreter, seemed less strident.

“The only thing I’m asking for is justice, that they pay for all the bad that they did to my wife,” Lopez said. “I’m going to stay fighting so that they never come out of jail.”

Avila, meanwhile, also derided Advocate Christ Medical Center in Oak Lawn for sending bills for the now-dead infant’s care, in the name of Figueroa, to Lopez, and hinted that he had partnered with a new law firm to sue the hospital.