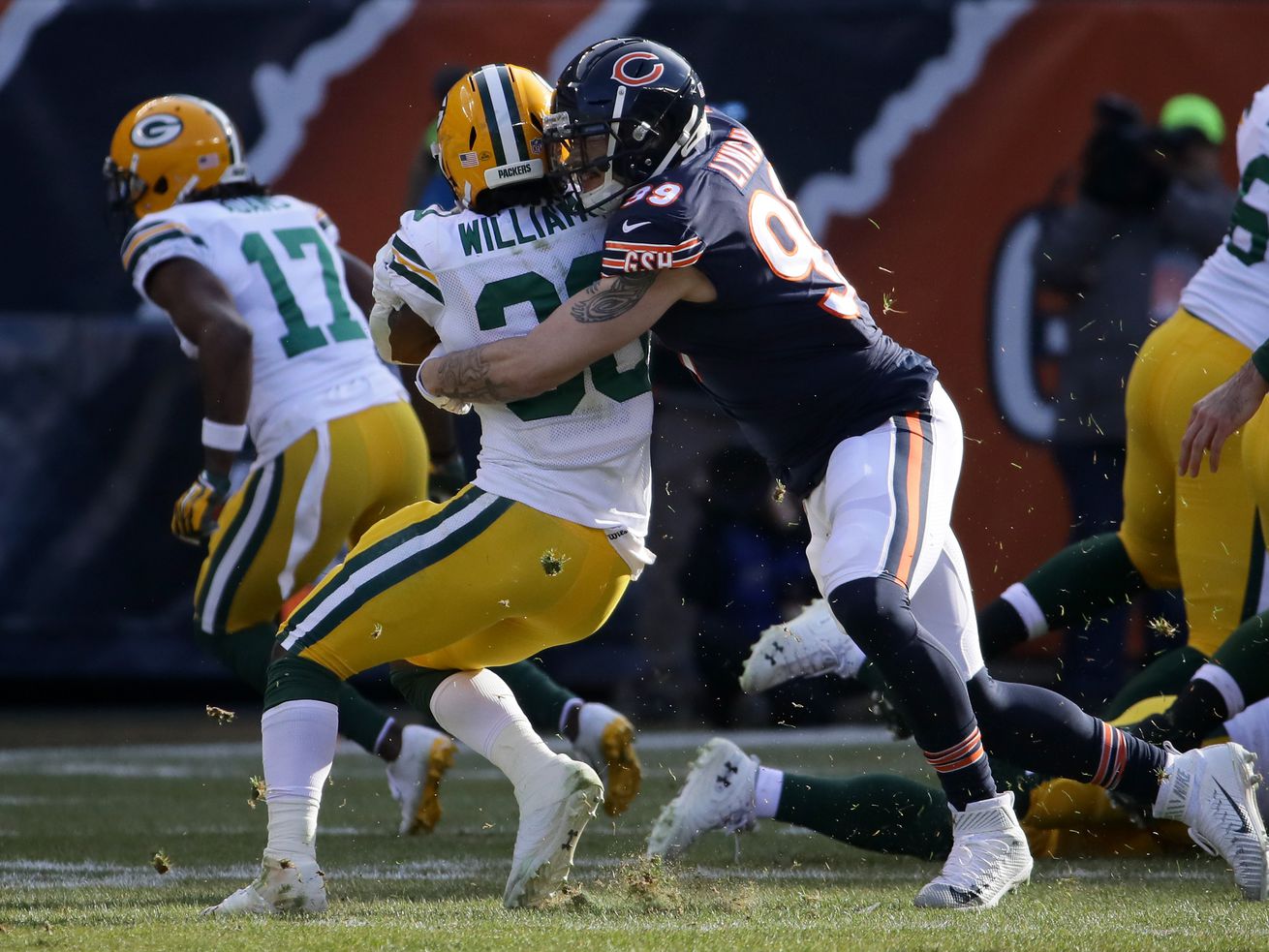 Aaron Lynch (99, tackling Packers running back Jamaal Williams for a loss at Soldier Field) had three sacks and an interception in 13 games last season. | Photo by Jonathan Daniel/Getty Images

Though disappointed in free agency, he’s ‘super happy’ to be back with the Bears. ‘I didn’t want to be anywhere else.’

BOURBONNAIS — Free agency was yet another humbling experience for star-crossed linebacker Aaron Lynch this year. Hoping for a multi-year contract after re-establishing himself as a productive NFL player with the Bears in 2018 — and still only 26 — he instead settled for a one-year, $1.45 million contract with the Bears.

Disappointed? “Yes and no,” Lynch said. “I hit the market when a bunch of other dudes hit the market, too. You’re always got Tier 1 guy and a Tier 2 guy. I was in the middle of that — ‘Well, if we can get this guy than we don’t need him.’

“[But] for me and my family, as a football player to grow more, this was the best place. Obviously, who doesn’t want a long-term deal? So I’m disappointed in not getting a long-term deal with a lot of money. But I’m also super happy that I got to stay in Chicago. And even though I’m taking what I’m taking, mentally I didn’t want to be anywhere else. Financially, I was like, ‘I’ll go anywhere.’ But mentally I was like, ‘I never wanted to leave.’”

It was a tough break for Lynch, but a good one for the Bears. Lynch still is a superior athlete at 6-6, 270, with big-play potential playing behind starting outside linebackers Khalil Mack and Leonard Floyd.

“[He] worked his tail off last year, coming into our program to understand how we do things with this culture, and he’s productive,” coach Matt Nagy said. “He understands learning from Khalil and Leonard and those guys. It’s important to have depth and we like where he’s at.”

Lynch indeed has bought into the defensive culture instilled by Nagy and former coordinator Vic Fangio.

That’s a mind-set that even Lynch admits he wouldn’t have had five years ago when he entered the NFL. “No,” he said, “Because five years ago, it was all about me — ‘I’m going to make the most plays I want to make.’ [Now] I’d rather be on the No. 1 defense than excel [individually]. Don’t get me wrong — I want 13 sacks. But if I’m on the best defense and get five sacks, then I’m doing my part.”

Lynch knows he has work to do to improve on his 2018 performance. After missing virtually all of training camp and the preseason because of a hamstring injury, he had three sacks and an interception in 13 games. He missed the final two games of the regular-season and the wild-card playoff loss to the Eagles with an elbow injury.

“I had a pretty decent year. [But] I could have done way freakin’ better,” Lynch said. “Let’s be honest, I could have stayed a little more healthy and taken care of myself a little more. But it was cool. I just want to [improve] on that and we have a huge opportunity this year, so I just want to be better than I was last year. If a lucrative deal comes, who gives a [darn]. But I’m hoping I stay here for a long time.”