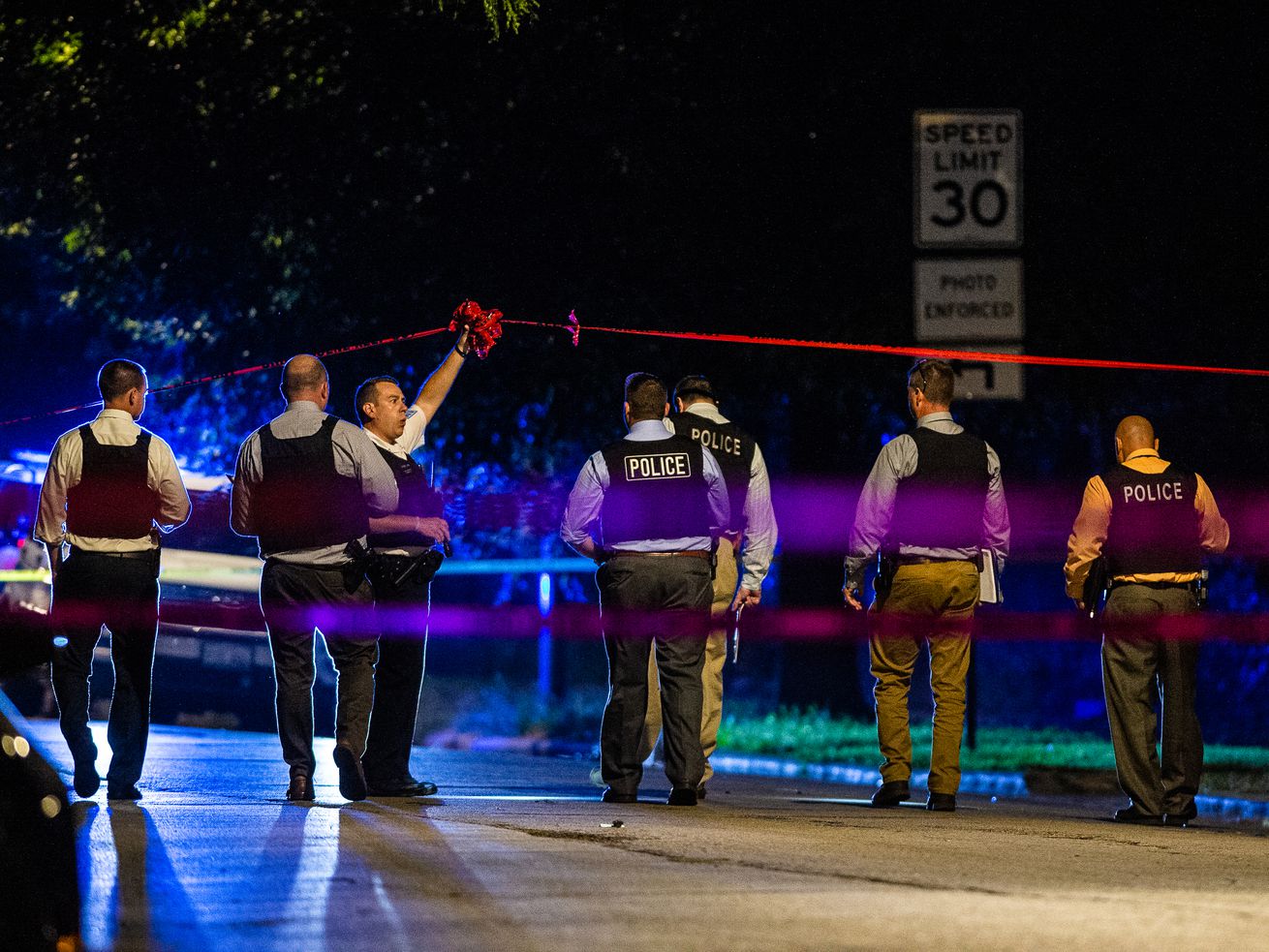 Chicago police investigate the scene where two people were shot and killed and one was wounded, Friday night, in the 7500 block of South Stewart, in the Gresham neighborhood | Tyler LaRiviere/Sun-Times

Two women were killed in a triple shooting in Gresham, and a 12-year-old girl was among three people who were shot on a porch in Englewood.

At least 48 people were shot — eight fatally — in incidents of gun violence within city limits over the weekend.

Shootings escalated as the weekend went on: Nine people were wounded Friday after 5 p.m., 15 were shot Saturday and Sunday saw 24 people shot.

On Sunday, a 3-year-old boy died from what Chicago police said may be an accidental gunshot wound in South Deering.

Family members told police they were in another room in the 9600 block of South Escanaba when they heard a gunshot at about 4:15 p.m., CPD spokesman Anthony Guglielmi said. They rushed to see what happened and found the boy with the gun. He suffered a gunshot wound to the face, police said.

Family members took the boy to Trinity Hospital where he was pronounced dead, Guglielmi said.

The Department of Children and Family Services has been called in to assist police investigations, Guglielmi said.

The weekend’s latest fatal gun violence incident happened a few hours earlier in Lawndale on the West Side.

Officers responded to a ShotSpotter alert about 4:59 a.m. in the 3200 block of West Douglas Boulevard, police said. There, they found a 24-year-old man with multiple gunshot wounds, including to his face and head.

He was pronounced dead on the scene, police said.

On Saturday, another man was found shot to death a few blocks away in the same neighborhood.

About 8:20 p.m., Curtis Davis was sitting in a vehicle in the 4000 block of West Grenshaw Street when he was shot in the back of the head, police and the Cook County medical examiner’s office said. He was pronounced dead at the scene.

A few hours earlier, a man was discovered fatally wounded in a home in Park Manor on the South Side.

Officers found Eric Hamilton Jr., 29, inside the home about 2:30 p.m. in the 6700 block of South Wabash Avenue with a gunshot wound to his forehead, authorities said. He was pronounced dead at the scene.

Just after dawn, a man was killed in University Village on the South Side near the University of Illinois at Chicago campus.

Officers responded to a call of a person shot about 7:10 a.m. in the 1300 block of South Blue Island Avenue and found a man who had been struck multiple times, Chicago police said.

The man, who was thought to be between 18 and 20 years old, was pronounced dead on the scene, police said.

The Cook County medical examiner’s office did not immediately provide details about the fatality.

About three hours earlier, a man was shot and killed in Englewood on the South Side.

Officers responded about 4:07 a.m. to the 5600 block of South Loomis Boulevard for a call of shots fired and found Robert Scott, 32, with a gunshot wound to the head, authorities said.

He was taken to the University of Chicago Medical Center where he was pronounced dead, police said.

On Friday, a man was fatally gunned down in Austin on the West Side.

Desmond Curry, 28, was standing next to a vehicle about 11:38 p.m. in the 700 block of North Waller Avenue when an unknown number of males approached him on foot and opened fire, police and the medical examiner’s office said. He was hit multiple times in the body.

He was taken to Stroger Hospital where he later died, police said.

Another man, 30, was also struck by gunfire, police said. He was walking on the sidewalk when shots rang out and was hit in the back. He was taken to Loyola University Medical Center where his condition was stabilized.

Earlier, two women were killed and a man was wounded in a triple shooting in Gresham on the South Side.

Officers responded to a ShotSpotter alert about 10 p.m. in the 7500 block of South Stewart Avenue and found the women suffering from gunshot wounds, police said.

Chantell Grant, 26, and 35-year-old Andrea Stoudemire were struck in the chest and taken to the University of Chicago Medical Center where they were pronounced dead, authorities said.

A man, 30, was hit in the arm and took himself to St. Bernard Hospital in good condition, police said.

There were no reported shootings Monday morning before 5 a.m.

At least 30 others were hurt in gun violence incidents over the weekend across Chicago.