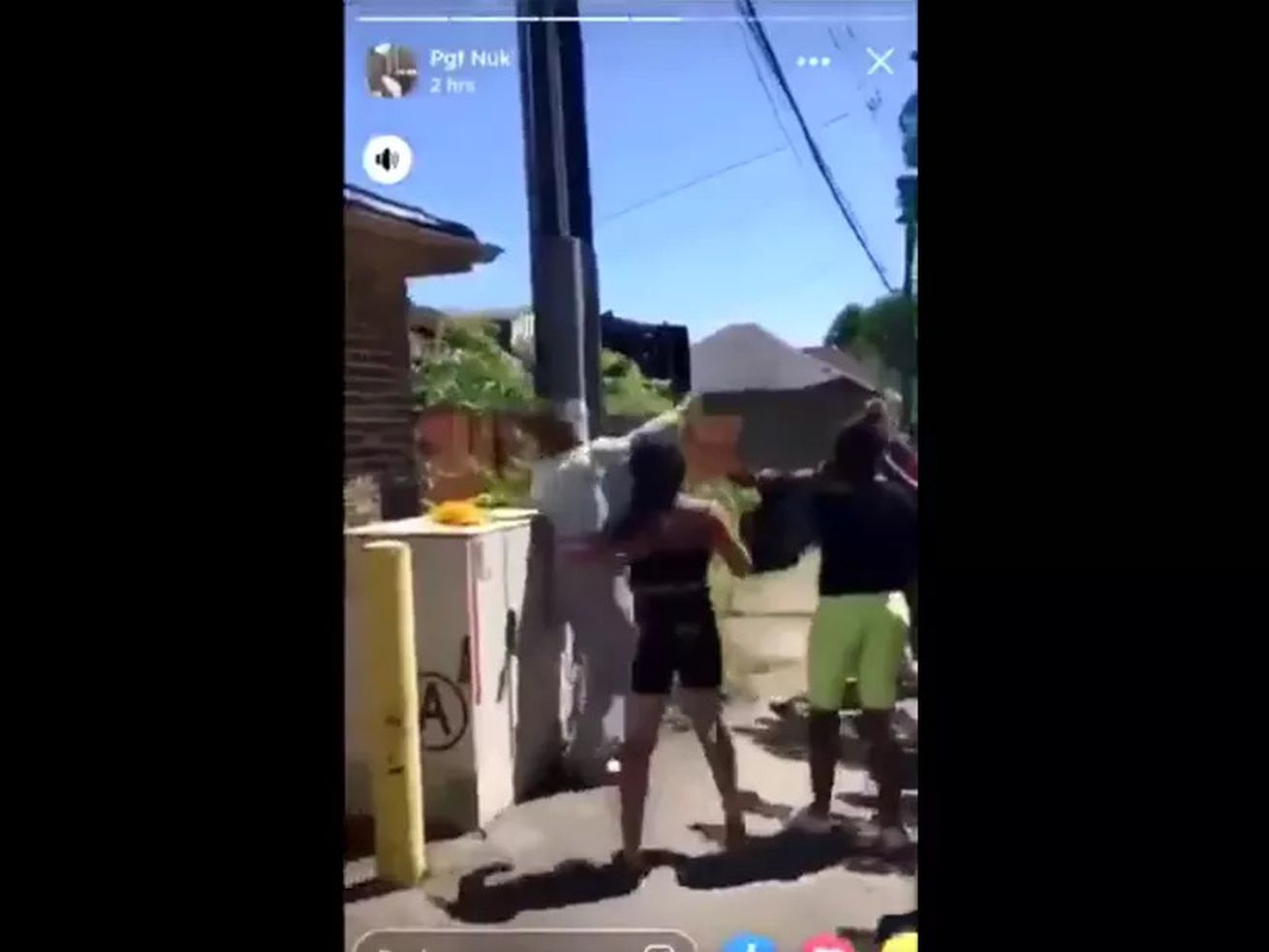 A screengrab from a viral video shared July 22, 2019 of a girl being beaten by a group of females. | Twitter user @D4MURE

The three turned themselves in to police with their parents Wednesday night. The parents of two of the girls said they fear for their safety after receiving threats.

Three teens have been charged in the attack of a girl with a mental disability that was recorded on cellphone video after she refused to engage in sex acts.

Three girls — ages 13, 14 and 15 — were charged with aggravated battery and mob action, according to Chicago police spokesman Anthony Guglielmi.

The three turned themselves into police with their parents Wednesday night, according to Cook County prosecutors and a police source.

The two younger girls appeared together for a hearing Thursday morning at the Cook County Juvenile Justice Center before Judge Terrence Sharkey, each wearing a juvenile detention uniform of a purple shirt and navy sweatpants.

The Chicago Sun-Times is not identifying the girls or their mothers because the girls are charged as minors.

The 14-year-old, who wore her hair long to her shoulders, was released to the custody of her mother and ordered to be placed on electronic monitoring.

“She’s a good girl when she wants to be,” the girl’s mother said after court. The mother added that older girls in the neighborhood were a bad influence on her daughter. “I’m not for her beating on anyone. I’m just so irritated with all this,” she said.

The older girl, who wore her hair short, was ordered to be placed on electronic monitoring, but she will be placed at the Saura Center — a temporary shelter for juveniles who would otherwise be kept in juvenile detention. That girl’s mother had told the judge that she feared for her family’s safety if she returned home.

“I’m fearful for my life and for my daughter’s life,” the woman said. “I don’t think she’d be safe to leave out this courtroom.”

Both parents told the judge they have received multiple threats against their daughters and their families. Prosecutors had asked for both girls to be held in juvenile detention “for their safety.” Sharkey encouraged the families to report any threats to the police, which they said they had already done.

Sharkey told the 15-year-old girl’s mother she would be safe at the Saura Center, adding that she might come back with additional skills her mother would find helpful at home.

“They kind of earn their keep there,” Sharkey said, before listing cooking and cleaning responsibilities the girl would be required to help with at the center.

Both teens were told they could have no communication with each other, or with the 15-year-old they are accused of battering. Sharkey additionally ordered that each girl meet with an educational advocate.

“We are not here to punish her now,” Sharkey said, later telling the mother to take “a deep breath” and noting that the level of stress for all involved was high.

When the hearing ended, the mother of the older girl wished her daughter a happy birthday as she was led out of the courtroom and cuffed in a hallway.

Outside the courtroom, that girl’s mother said she understood why people were upset, saying she would feel the same it it was her daughter who had been attacked.

“When you do an adult thing, this is what happens,” the mother said.

In the video, the 15-year-old can be seen walking with a group of people when a female in a black tank top and shorts walks behind the girl and punches her. Someone recording the girl starts laughing as more punches are thrown and the girl begins to scream and tries to protect herself.

Several girls then surround her and continue hitting her until she falls to the ground. Just before the video ends, someone appears to help the girl to her feet as she continues to cry.

Chicago Police News Affairs Office Jose Jara said Wednesday detectives are also looking into the possibility that the girl was sexually assaulted while she was missing “based on initial testimony from the victim herself.”

Of the videotaped attack Police Supt. Eddie Johnson said Thursday, “The hate that we all saw is an affront to who we all are as Chicagoans.”

The top cop added, “If you’re dumb enough to post a crime on social media, that just shows where your head is.”

According to police, the victim was reported missing by her father on July 18. The footage of her attack was recorded on July 22 and posted to social media the next day — the same day she was found.

At a news conference at police headquarters Thursday, Johnson and Lt. Ozzie Valdez credited community activists and a vigilant citizen for helping police locate the victim.

On July 23, a passenger on a Blue Line train on the West Side saw her onboard. From there, she was taken to the CPD’s Harrison District station, and later to Comer Children’s Hospital for observation. Police said the girl was treated at the hospital and released.

Valdez said the investigation remained active, noting that the three suspects who were charged were not the only people involved in the attack.