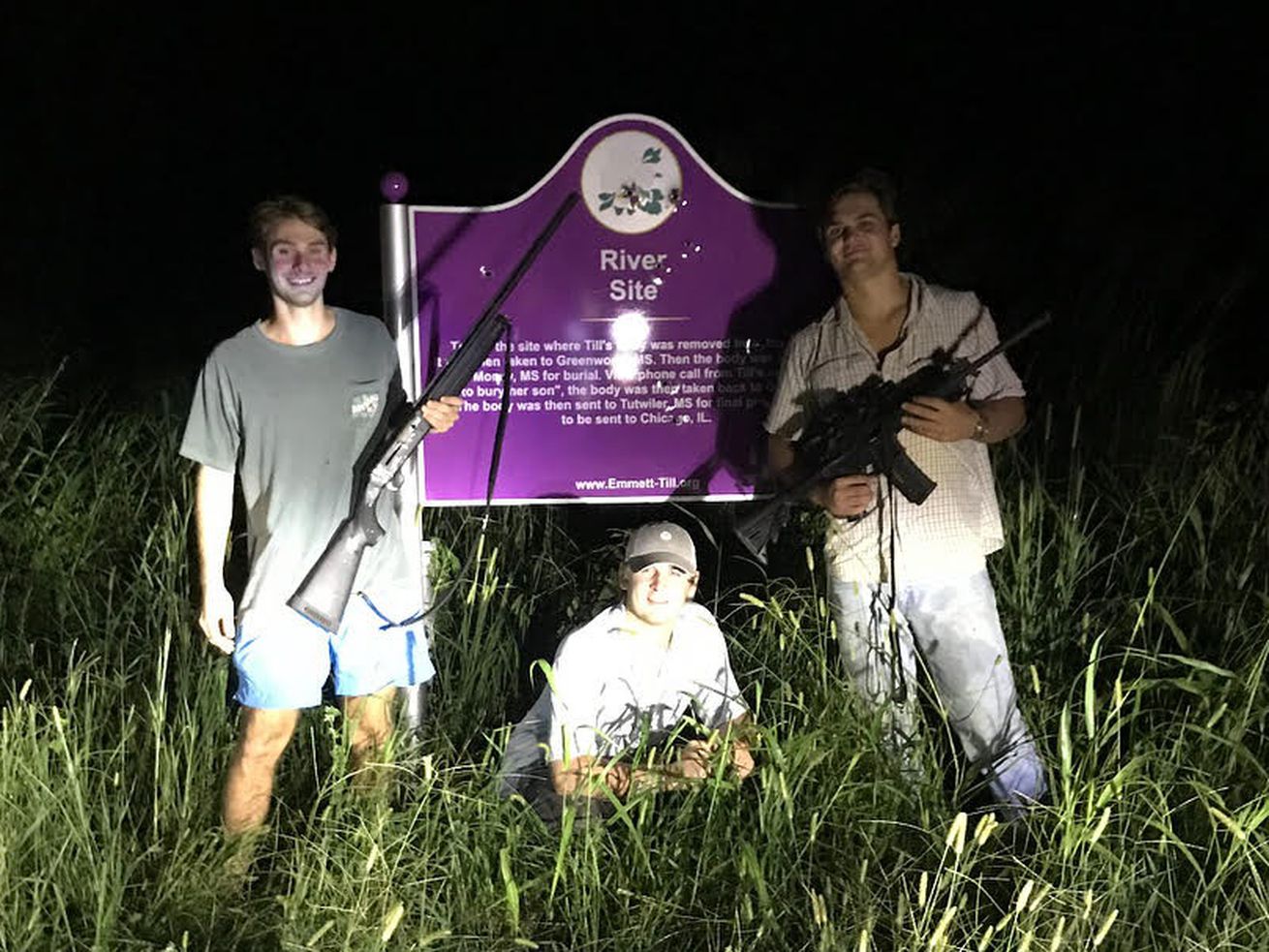 It is not clear whether the fraternity students shot the sign or are simply posing before it.

Three University of Mississippi students have been suspended from their fraternity house and face possible investigation by the Department of Justice after posing with guns in front of a bullet-riddled sign honoring slain civil rights icon Emmett Till.

One of the students posted a photo to his private Instagram account in March showing the trio in front of a roadside plaque commemorating the site where Till’s body was recovered from the Tallahatchie River. The 14-year-old black youth was tortured and murdered in August 1955. An all-white, all-male jury acquitted two white men accused of the slaying.

The photo, which was obtained by the Mississippi Center for Investigative Reporting and ProPublica, shows an Ole Miss student named Ben LeClere holding a shotgun while standing in front of the bullet-pocked sign. His Kappa Alpha fraternity brother, John Lowe, squats below the sign. A third fraternity member stands on the other side with an AR-15 semi-automatic rifle.

LeClere posted the picture on Lowe’s birthday on March 1 with the message “one of Memphis’s finest and the worst influence I’ve ever met.”

Neither LeClere nor Lowe responded to repeated attempts to contact them.

It is not clear whether the fraternity students shot the sign or are simply posing before it. The sign is part of a memorial effort by a Mississippi civil rights group and has been repeatedly vandalized, most recently in August 2018. Till’s death helped propel the modern civil rights movement in America.

Five days after LeClere posted the photo, a person who saw it filed a bias report to the university’s Office of Student Conduct. The complaint pointed out there may have been a fourth person present, who took the picture.

“The photo is on Instagram with hundreds of ‘likes,’ and no one said a thing,” said the complaint, a copy of which was reviewed by the Mississippi Center for Investigative Reporting and ProPublica. “I cannot tell Ole Miss what to do, I just thought it should be brought to your attention.”

The photo was removed from LeClere’s Instagram account after the Mississippi Center for Investigative Reporting and ProPublica began contacting fraternity members and friends. It had received 274 likes.

Kappa Alpha suspended the trio on Wednesday, after the news organizations provided a copy of the photo to fraternity officials at Ole Miss. The fraternity, which honors Confederate Gen. Robert E. Lee as its “spiritual founder” on its website, has a history of racial controversy, including an incident in which students wore blackface at a Kappa Alpha sponsored Halloween party at the University of Virginia in 2002.

“The photo is inappropriate, insensitive and unacceptable. It does not represent our chapter,” Taylor Anderson, president of Ole Miss’ Kappa Alpha Order, wrote in an email. “We have and will continue to be in communication with our national organization and the University.”

After viewing the photo, U.S. Attorney Chad Lamar of the Northern District of Mississippi in Oxford said the information has been referred to the Justice Department’s Civil Rights Division for further investigation.

“We will be working with them closely,” he said Thursday.

University spokesman Rod Guajardo acknowledged that an Ole Miss official had received a copy of the Instagram picture in March. The university referred the matter to the university police department, which in turn gave it to the FBI.

Guajardo said the FBI told police it would not further investigate the incident because the photo did not pose a specific threat.

Guajardo said that while the university considered the picture “offensive,” the image did not present a violation of the university’s code of conduct. He noted the incident depicted in the photo occurred off campus and was not part of a university-affiliated event.

“We stand ready to assist the fraternity with educational opportunities for those members and the chapter,” Guajardo said.

He said the university will continue to build programs to engage students in “deliberate, honest and candid conversations while making clear that we unequivocally reject attitudes that do not respect the dignity of each individual in our community.”

Since the first sign was erected in 2008, it has been the object of repeated animosity.

Vandals threw the first sign in the river. The second sign was blasted with 317 bullets or shotgun pellets before the Emmett Till Memorial Commission officials removed it. The third sign, featured in the Instagram photo, was damaged by 10 bullet holes before officials took it down last week. A fourth sign, designed to better withstand attacks, is expected to be installed soon.

News of the suspensions and referral to the Justice Department came as Till’s cousin, Deborah Watts, co-founder of the Emmett Till Legacy Foundation, was already planning a moment of silence Thursday to honor her cousin with a gathering of supporters and friends dressed in black and white in “a silent yet powerful protest against racism, hatred and violence.” Thursday is Till’s birthday. Had he lived, he would have been 78 years old.

This is not the first time Ole Miss fraternity students have been caught up in an incident involving an icon from the civil rights movement.

In 2014, three students from the Sigma Phi Epsilon fraternity house placed a noose around the neck of a statue on campus of James Meredith, the first known black student to attend Ole Miss. They also placed a Georgia flag of the past that contains the Confederate battle emblem.

According to federal prosecutors, the freshmen students hatched the plan during a drinking fest at the house, where one student disparaged African Americans, saying this act would create a sensation: “It’s James Meredith. People will go crazy.”

One pleaded guilty and received six months in prison for using a threat of force to intimidate African American students and employees because of their race or color. Another student also pleaded guilty. He received probation and community service after he cooperated with the FBI. A third man wasn’t charged.

All three students withdrew from Ole Miss, and the Sigma Phi Epsilon fraternity’s national headquarters shuttered its chapter on the Ole Miss campus after its own investigation, blaming the closing on behavior that included “hazing, underage drinking, alcohol abuse and failure to comply with the university and fraternity’s codes of conduct.”

This article was produced in partnership with the Mississippi Center for Investigative Reporting, which is a member of the ProPublica Local Reporting Network.