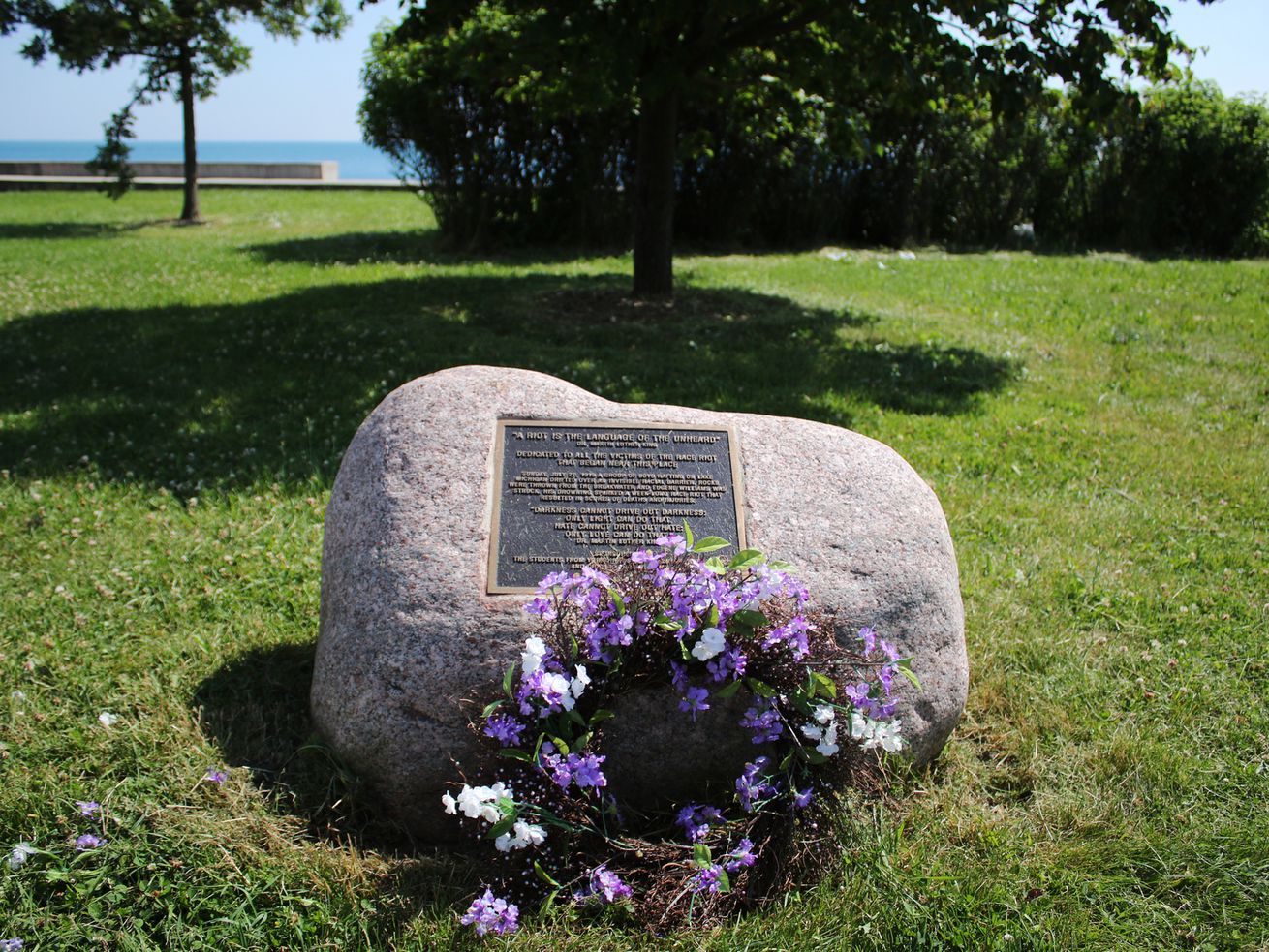 A wreath lies in front of a site commemorating the 1919 race riots in Chicago. The plaque is along the lakefront trail, near the area where black teenager Eugene Williams was killed at 29th Street Beach. | Noreen Nasir/Associated Press

It was the most violent week in Chicago history and one of the city’s most formative events with an impact still seen today. Yet it’s not widely discussed or even remembered by the average Chicagoan.

The 1919 race riots, which started 100 years ago Saturday, have been seemingly erased from the city’s collective memory.

“It has never been comfortable in this country to talk about race. People would rather not and would rather attribute a lot of the difficulties that we have to something other than race,” said Charles Whitaker, dean of Northwestern University’s Medill School of Journalism.

Whitaker’s grandparents were African American; they moved to the city a few years before the riots, at a time when racial tension in Chicago was coming to a head. His parents were both born within four years of the deadly attacks. Yet he heard little to nothing about the violent week growing up.

“Even though in many ways it is a really seminal event in Chicago history and kind of sets up patterns of segregation that persist for generations afterward, it is not something that we know very much about in Chicago,” Whitaker said.

”And I don’t know if it’s the shame of the event that keeps us from talking about it,” he said. “I actually have no explanation for why this really important, devastating event isn’t better known in Chicago history.”

Whitaker, along with WBEZ’s Natalie Moore, is hosting a discussion at noon Saturday across from the Newberry Library in Washington Square Park, 901 N. Clark St., to commemorate the 100th anniversary of the riots.

It all started when a white man, 24-year-old George Stauber, threw stones at a group of black boys who had crossed an unofficial line in the water at 29th Street Beach separating white and black swimmers. Eventually, the rocks caused 17-year-old Eugene Williams to fall in, and drown.

Daniel Callahan, the first police officer to arrive, refused to arrest Stauber — a decision that angered blacks on the beach.

A series of events is scheduled Saturday at 31st Street Beach, near the scene of Williams’ death. They include several performances, art pieces and historical displays.

Artists Jefferson Pinder and A.J. McClenon have organized a performance featuring about 100 participants — signifying the 100 years since Williams’ death; they will float in the water where the teenager died.

The pair has been on a remembrance tour this summer to mark a broader anniversary. Chicago was just one of many cities where race riots occurred in during what became known as the Red Summer. Saturday’s hour-long performance, starting at 4:15 p.m., is the last stop on their tour.

Along with the people floating in the water, McClenon will play meditative sounds, and a musician will play a saxophone as participants walk into the water.

“Not a lot of people knew about Eugene,” said Aimy Tien, a storyteller and producer with Pinder and McClenon’s summer tour. “It’s striking how much we don’t know about the darkest parts of our history.”