The first strike in this year’s Major League Baseball trade deadline season landed home earlier this week, as the New York Yankees and Chicago Cubs agreed on a deal that would send a fleet of top-tier Cubs prospects to New York in return for all-universe closer Aroldis Chapman. And really, it should surprise virtually nobody that it was the Cubs who have swung the first – and as of this writing, only – blockbuster deal during this year’s trade deadline stretch run, because the highlight signing has been their modus operandi for the past two years now, as they have built themselves into baseball’s premier collection of big name talent. The four-time all-star is back in the National League Central where he built his reputation as the premier strikeout artist in baseball with the Cincinnati Reds and is primed to be an overpowering bookend to the works that Jake Arrieta, Jon Lester and company begin the day with.

On the surface level, it is a no-brainer of a deal to make: the Cubs land a top talent in the game to shore up a bullpen that could be perceived as the one potential chink in their collective armor. Since making his season debut in May, Chapman has locked down 95 percent of his save opportunities on the year, failing to convert just one of his 20 chances while donning Yankee pinstripes. And while his strikeout rate is at a career-low 12.6 per nine innings, his walks per nine are at a near career low. And, of course, there is the fact that he can seemingly reset the record book for fastest recorded pitch at will, as he did last week when he once again topped 105 mph, the third such time he has done so in the past two years.

So yes, Chapman is the cherry on top of the Cubs’ colossal all in effort to end sport’s most notorious losing streak this year. So the question should not be if the trade has value, because that is evident. Neither should it be whether the cost justifies the outcome either. Sure, agreeing to trade away a pair of top 100 prospects in Gleyber Torres and Billy McKinney is a high price to pay, especially for a player who could be a rental pickup, as Chapman is headed to free agency after the season. And perhaps the trade’s risk was even further compounded by the decision to include talented pitcher Adam Warren (whom the team had just acquired from the Yankees this past offseason for Starlin Castro), as well as a nice upside toss-in in Rashad Crawford as well. 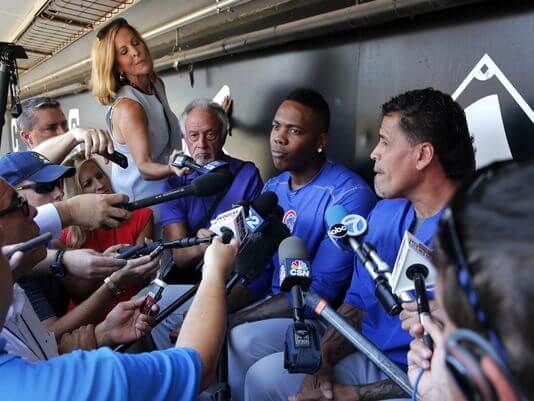 However, when a club is in the heart of a historic pennant chase, such as the Cubs are, it is hard to blame them for sacrificing a part of the future for the very urgent business at hand. Regardless of their talent, many of the prospects they dealt away faced a level of uncertainty in factoring into the big league club’s future. The foundation of the Cubs is a precociously talented group of early-20’s all-stars, who will make it difficult for any current minor leaguer to immediately penetrate for playing time. Torres would be tossed into the fray with Addison Russell and Javier Baez, while McKinney would be faced with a timeshare situation with not only Jason Heyward and Albert Almora, but also the balancing act of finding at-bats for Kyle Schwarber and Jorge Soler as well. So if there was a time to deal from the top of their prospect deck, it was both now and with these specific talents.

Perhaps if there was to be any second guessing, it could go to why to trade that away for a closer, as opposed to another top-flight starter who could potentially be available in the offseason, such as a Sonny Gray, Jose Quintana or even Jose Fernandez.

The red flag that could be waved is that not only that the ninth inning has not been an area of significant need for the Cubs, but also that shaking up the end of bullpen structure at the end of a season is a risky proposition. Sure Chapman is as solid of an insurance policy as there could be, but they are not a team that has struggled to secure late inning victories as is. They have blown 10 save opportunities on the year, and their now-disposed closer Hector Rondon had been as good as could be asked in the limited save chances that he had received this year, converting 18 of 22 chances on the year and had already matched his season-high in saves for a month in July.

Perhaps a more boiled down risk is hoping that Cubs leadership knows when to say when in regards to tinkering. Chapman’s addition brings both talent and controversy, as he continues to chase down the ghosts of the domestic abuse issue that earned him a 30-game suspension to start the year. Before he has even thrown his first pitch for the team, he has already been bombarded by questions regarding a rumored character discussion the team had with him before the trade was consummated. In turn, Chapman denied having a recollection of this deal, which has furthered the discussion of everything with the exception of baseball around the team. They have been able to stay devoid of most non-baseball related topics this season, which is a plus for a young team that is making its first bid to play on top from wire-to-wire.

Distractions, alignment and shakeups have to be well measured when being placed into the course of a season that is working so well, regardless of the potential payout. Many a team that makes sense to win it all does not do it simply because they are besieged by a team that is better in tune together at the moment.

Chicago would be best served to not forget about the guns they stuck to in order to get where they are. The way that the Cubs have gotten to where they are is by both a patient acquisition and stockpiling of prospects and young talent. And thus far in their rise into baseball’s elite, they had done so by being able to maintain those young talents as assets to deploy for a boost at given points throughout the season. Last year, Kris Bryant and Addison Russell propelled the team early on, while Kyle Schwarber did so later. And between this trio of in-house talent alone, they maintain 18 years of total team control still on their contracts. That is a phenomenal amount of talent to have guaranteed access to for over the next half decade.

So in that vein, the Cubs did the right thing in going for Chapman because the future is not promised. While it is highly likely they will continue to be an elite team in the years to come, anything could besiege their roster and compromise that. The ability to weather the storm of Schwarber’s early, season-ending knee injury was the depth of their internal talent pool. They have lessened that strength by bringing aboard Chapman, and while they are nowhere near prospect-depleted, it would serve Theo Epstein, Jed Hoyer and company well to be careful in how many blockbuster trades they pull the trigger on based on their internal assets. The Cubs have talent in spades and are positioned to be relevant for as long as any team in baseball currently, but rival GM’s are acutely aware of their hunger to cash in on the now. An access of deals built to win as soon as possible could zap them of their realistic ability to prolong their relevance, in what is far from a guaranteed push for today.

A slightly more cautious urgency moving forward would serve them well. They should be conscious of becoming Icarus in their attempts to reach baseball’s October sun.

The post In Landing Chapman, The Chicago Cubs Should Exercise Caution appeared first on .